PNG can be 8bpc or 16 bpc but even at 16, you are not having a proper linear scene referred high dynamic range file.
I would not recommend anything else but the openEXR file format (not even .tiff or .hdr).

Photoshop is just not the tool to do such a conversion in the first place.

Hi Daniel,
yes, this is exactly the workflow we use at the studio

In a flame/nuke/ps environment, we use ACEScct tiffs with a lut in ps and conversions in the 2d packages.
No problem.

What I’m trying to build is a simple way for MP artists to have the ability to do the conversion from ACEScg to ACEScct themselves.

To be more flexible and not rely on 2D guys.

I’ve created a simple Nuke script, with correct unpremult, etc. and it works great, but…
Then you have the problem of licences, where MP guys fight with 2D guys for available licence

So that’s why I’m trying to find alternative.

Let me describe the steps I do in PS:

The problem is, that because I’m still in 32bit mode - even after the conversion to ACEScct - thats just the plugin doing the work, PS has no idea - anytime you want to go from 32bit mode to 16bit mode - PS adds some kind of mapping to it - either srgb gamma, or some version of exposure/hightlights mapping or whatever - it won’t just leave it be! 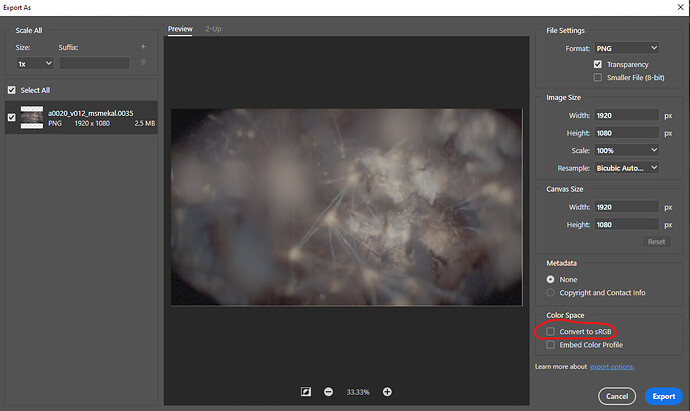 image1256×749 115 KB
here, you have the option to NOT apply the srgb gamma going from 32bit to anything lower
but this png is 8bit

so that’s where I got, if you’d have any suggestions, that would be great
or maybe PS just not the app to do this…but it easily could be
if only they had the option to export a 16bit PNG from that menu - that’s it!

I am aware of all of that, I described the steps in my reply to TooDee, if you’d like to take a look.
Thanks a lot!

Hi, thanks for your detailed reply. I still think Photoshop is not the right tool to do the conversion.
Why not asking @MrLixm if he can add a TIFF output option in his tool: PYCO Image Colorspace Converter [Free]
This could be another easy way to convert your EXR ACEScg images to ACEScct TIFFs. Just be always aware of the clipping at 222 in scene linear.

ou wow, wasn’t aware of that!
@MrLixm I will definitely check that. Take my money!

But I’m not after only a simple conversion, there is also the issue of premultiplied cg renders in ACEScg.
I need to first unpremultiply them and THEN do the conversion from ACEScg to ACEScct…
So they could be comped with a bg in ACEScct in PS.

So it’s not just a single step conversion.

Hey Martin, this link may help you out…

Hi, In this thread I will talk about comping ACEScg renders in Photoshop. This is a follow up on my ACES workflow in Vray for Modo...

Maya 2022 with OCIO 2 does create an other layer of crazyness to all this.
Has someone managed to get a workflow form Maya to Natron or Nuke working?

@oglu can you say more about the trouble you are having with Maya 2022 and Nuke? Maya 2022 can use ocio v2 but also still works with ocio v1 configs. Nuke currently only supports ocio v1. So one possible workflow is to use an ocio v1 config for both. Another workflow is use a v2 config for Maya and a v1 for Nuke.

Heya, could we split this conversation into a separated thread about Maya, Nuke and OCIOv2 (if needed) ? Thanks,
Chris

Alex,
As a 3D generalist freelancer who is just moving to an ACES workflow I’ve just registered to say a sincere thank you. The previous ACES / Photoshop workflow that was suggested to me - not from this forum of course - was unworkable. This is fantastic. You’ve just saved my professional life with this set up.
Thank you for your generosity and expertise. Where do I send the beer…

Hi Daniel,
I really love your article but I have a question regarding choosing Rec709 instead of sRGB with the pictures let’s say from the internet (I know there is little difference and not that big), isn’t that more accurate to have the sRGB instead?
Thanks

I’d like to loop back to the question posed by @martin.smekal regarding bringing in a 32-bit ACES linear exr and outputting a 16-bit ACES log tiff. Is there any particular reason this is beyond the capabilities of Photoshop’s HDR tone mapping? Assuming consistent AP1 primaries this could be accomplished with a 1D lookup no?

Hi,
I always write out ACEScc or ACEScct 16-Bit TIFF images from Nuke, load them into Photoshop, do the retouch and go back to Nuke.
As far as I know there are still some functions in PS that are only available in 16-bit INT but not in 32-bit FLOAT mode. I use mostly content aware fill and the patch tool.

So I never thought about loading EXRs in PS and exporting ACESlog TIFFs.
Affinity Photo supports OCIO on MAC and the import/export works flawlessly with ACEScg EXR files.

Thanks @TooDee. I’m aware the images can be pre-converted via Nuke (this is actually our current workflow). The target audience here is Photoshop users with limited access or working knowledge of Nuke or other DCCs, so the goal is to reduce our dependency on other toolsets and keep as many conversion steps as possible confined to the domain of PS. It’s a given that matte painters will be working in 16-bit mode (I applaud @alexfry for leading the charge on adoption of 32-bit float/linear paint workflows, but sadly we’ve found PS not up to the task). Given that changing modes from 32-bit down 16-bit will force PS users into the HDR tone mapping dialog, this feels like an opportune place to present a preset that will convert to the appropriate working color spaces (e.g. ACEScct). That is, assuming this is within the realm of HDR tone mappings capabilities; I have my doubts about any conversion that implies a transformation on the primaries (e.g. P0->P1), but otherwise a transformation from ACEScg to ACEScct could be accomplished with a 1D lookup. Has anybody had any success piggybacking on PS’ native color transform operations to accomplish what I’ve described?

I hope PS will be supporting OCIO v2 soon and then it should be a lot easier for everyone.

Do you mean natively? The OCIO plug-in for photoshop does support v2.0

It sounds like natively to me, at least I was hoping for it. 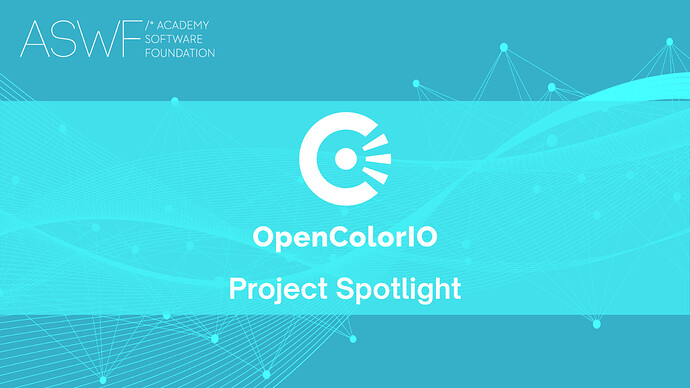 An open-source color management solution for VFX pipelines, OCIO is used widely across the film industry and this release was highly anticipated.

Adobe
Adobe is currently working to implement an ACES workflow inside an OpenColor IO v2 wrapper for its tools most often used in production pipelines: Photoshop, After Effects and Premiere Pro. Lars Borg, a SMPTE Fellow and one of the developers of ACES, is a core leader in Adobe’s color team who is leading the charge. His colleague Patrick Palmer, Principal Product Manager for Professional Video, notes that the ability to support ACES in OCIO v2 without a 3D LUT is a significant step forward to driving broad-scale support for ACES, and that the improved GPU renderer in OCIO v2 is a critical area that will drive adoption.
*

Native OCIO support in Photoshop would be a major step in the right direction, although there’s no mention of a timeline in the press release, so this could still be a ways off. In the context of existing available feature sets, I’m still curious if HDR tone mapping offers any hope?

@nico.vandenbosch have you tried the colorspace conversion tool in the Photoshop OCIO plugin? if you are wanting to stay inside photoshop that might give you what you need.

As far as I’m aware HDR tonemapping is just a tool designed for photography with artistic controls to map to SDR. There is no way to have it in a setting that will convert ACEScg to ACEScct or any other inversible log format.