Is there anyone making DCDM from Reslove?
Should I render a P3 RGB first?
been having some issues rendering my project directly from ACES to DCDM.
Can’t reverse the transform accurately.
Any suggestions on how this should be done. You can download a few frames from here: https://we.tl/utLlTRcRhd
Thank you guys.

that is what i do, then make the DCDM from an RCM timeline, with the input/timeline/output set to P3

seems to work acceptably well, i only make festival screeners, making a DCDM means it’s fast and easy to insert new mix’s, VFX Credits and burn a DCP in a few min, wel as fast as your disks can move the files, and maybe 5 min to create the XML

Yes, my workflow is ACES and DCDM for ODT. I try DCI-P3 but I found a differences in final DCP and in waveform. I don`t have any problems.

They are completely different outputs.

The DCDM is X’Y’Z’ with a Illuminant E white point for XYZ. (coming from D60 white)
DCI-P3 with a DCI white point (.314,.351) is an RGB color space for direct mastering of a device set to that color space.

Sorry, there is something I don’t get: I do my grade normally, then select DCDM as ODT. But then how should I render my TIFFs? Should I select TIFF XYZ 16bit in the render tab (probably causing a double transformation?) or must I select TIFF RGB 16bit (risking that some of the XYZ colors become out of gamut?) Please help.

Hi Jim, Could you elaborate what the correct workflow is for outputting to XYZ for a DCP?

Where is the right place to look for documentation on this?

Thanks for resurfacing this thread… which I see wasn’t completely answered.

For making a DCDM in Resolve 15, you should use aces_cc project settings. The Output Device Transform can be set to a g2.6 color space for grading, then switch the ODT to the DCDM (or DCDMP3clip). In the renderTab use TIFF RGB 16b not XYZ. The ODT version uses the proper scaling for the DCDM which the XYZ conversion in a render does not.

There is one caveat, the conversion in the DCDM ODT assumes the D60 ACES white point was used for timing. Equal value RGBs are assuming an output of D60. If a D65 was used for the adopted white, the conversion matrix from RGB to XYZ needs to be slightly different. I do not see how this is handled in Resolve and I assume it is not handled.

Validation of the output should check for gamma (2.6), gamut (reds are halved and orange), and scaling (the peak will NOT be 4096 in all three colors).

I think the different white conversions can be handled in the DCTLs that are in a different thread. But it is the same idea, don’t use the Resolve XYZ for the output conversion to a DCDM use a direct formula if possible, and just put the render tab in pass through of ‘RGB’

I haven’t searched for good documentation on this, but I think it may not exist.

I have just been testing how to export a DCDM out of Resolve 16 as you described it (openexr in RGB with ACES setting and ODT to DCDM) and compared the result of a DCDM from Clipster and in Clipster.

The DCDM exported from Clipster looks good, the one from Resolve not as …
Any ideas how to fix this or what I might have done wrong?

Thanks for any advice
Andrea 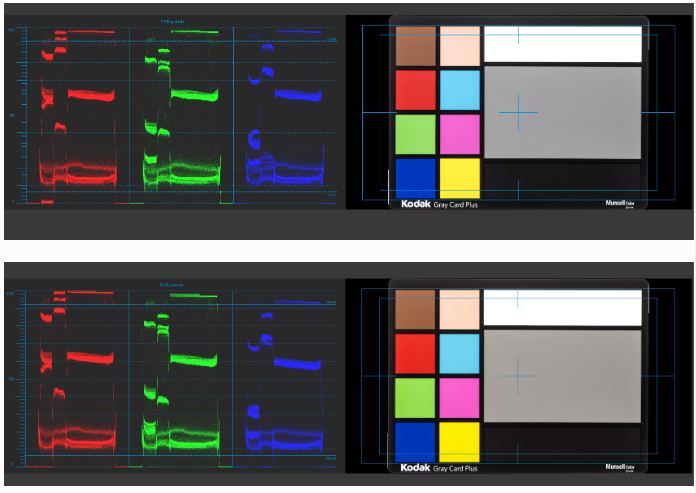 My suspicion is that this is a white point/adaptation mismatch. Some versions of the DCDM do include compensation for a different white point and some don’t. There are two ways around this… use the RGB ODT and convert to DCDM appropriately externally or make sure you’re using a DCDM ODT which is designed for the white point you expect to be neutral.

Hi Scott,
thanks for your mail,
yes I thought so too, but then I used a colour picker on the white, grey and black part of the image…
and interestingly the white stays white (255/255/255) and the grey and black get a slight tint.

I havent graded yet, as this is a test for the workflow. so I exported the exr in RGB (half) with this project setting (image).

use the RGB ODT and convert to DCDM appropriately externally or make sure you’re using a DCDM ODT which is designed for the white point you expect to be neutral.

How or rather with which programmes would you suggest?

I tried to test a workflow to export DCDM out of Resolve instead of using Clipster. Which for me is not connected to a specific project but rather the knowledge to advise students, which programmes they can get a proper DCDM for archiving 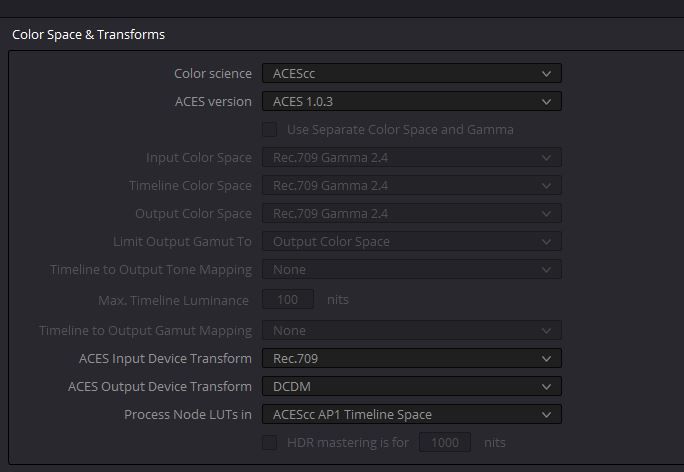 How do we actually get DCDM compliant TIFFs out though. They need metadata in them FPS frame count frame size and I can’t see this in the files from Resolve?

It looks like you can do this in Media encoder so we think you can make the TIFFS in Resolve then wash thru mediaencoder to add the metadata. But that’s not ideal.

How are people doing this?

Yes how is this done?

sorry for re-re-opening an oooold thread…

I want to in my workflow, just in single process, to export DCDM out.
I’m in the process of testing this pipeline.

There is nothing wrong i the DCDM condition.

But, there is a problem in the conversion process for validation…

Compared to the original, the graph is different. Of course, with the my naked eye.
Is there anything I’m missing?

I hope you understand my poor English, and poor knowledge.
Thk.