Following up on the discussion at today’s CLF VWG meeting, I’ve created an example test for the Preview Tier.

These may be found on the CLF Implementation DropBox Paper home page:

In summary, there is a source image, a CLF, and a result image as follows:

The proposed tolerance for this simple test is +/- two 10-bit code values.

Here is some more detail regarding how I created these:

I created the CLF by using OCIO to bake a transform from ACEScct to the Rec.709 ACES Output Transform into a simple 33x33x33 LUT3D. The steps I used are as follows:

(Note that I used the ACES OCIO 1.0.3 config for this test, because it was easier, although the 1.1 config would be slightly better. In any case, this is just a test and for the real test suite we will use a config that is based on OCIO v2 which will be more accurate.)

Following up on Tuesday’s CLF VWG meeting, I’ve created an example test for both the Finishing Tier and the Preview Tier. The files can be found on the CLF Implementation Dropbox Paper home page (linked directly below).

For both tiers, there is a source image, an output image that results from applying the CLF, and the CLF itself.

The Finishing Tier files are as follows:

The Preview Tier files were updated as follows (to be similar to the Finishing Tier):

Thank you Scott! As discussed in the VWG meeting today, the group agrees that this is a great “sample test” that implementers could start with.

We will delete my earlier draft of these test files from the Dropbox Paper site, so there is no confusion.

These AMFs conform to the proposed revisions by the AMF Implementation working group and should validate against the schema noted in the AMF files.

If it is of interest, I have tested the preview tier files against the experimental CLF 2.0 implementation in Colour Science for Python (CLF 3.0 is not yet fully implemented) and the results match Scott’s reference DPX to within one code value. If I use trilinear interpolation on the LUT3D, the results are considerably different. So it should be very easy to verify if a hardware LUT device is using tetrahedral or trilinear interpolation.

You can see a version my test code in this Google Colab.

I have updated the Colab to include baking the CLF into a simple 33^3 cube. The max difference is then far more significant.

It also now displays the mean error as well as max in each case.

Updated again to add some investigation into the edge case errors when the CLF is baked into a single 3D LUT (as will often be the case for hardware implementations).

But in fact I think it is simply the result of a negative offset followed by a 0-1 clamp, applied by the ASC CDL node. 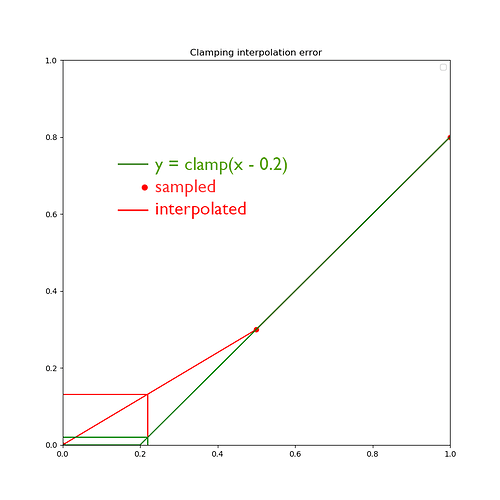 clamp_interp_error_3900×900 27.7 KB
Negative offset, followed by clamping 0-1 will produce a hard corner in the true output (the green line). Sampling either side of that corner, and then interpolating (the red line) will give an inaccurate result, particularly near the cusp.

(This is obviously an exaggerated example, with a large offset and small number of samples to make the point)

And here is a plot of the actual output of the CLF applied to a green ramp from 0-1 (with red and blue held at zero). 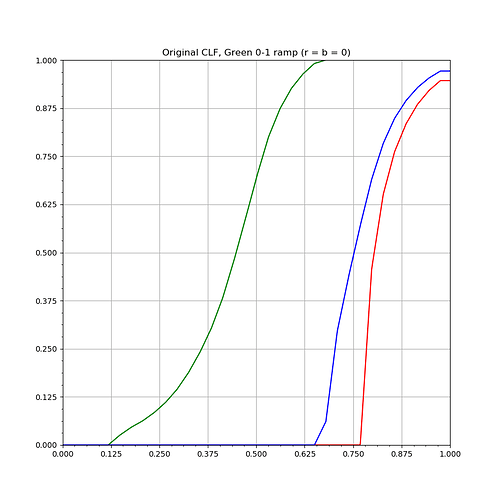 Here is a plot of the same ramp processed through the baked single 3D LUT: 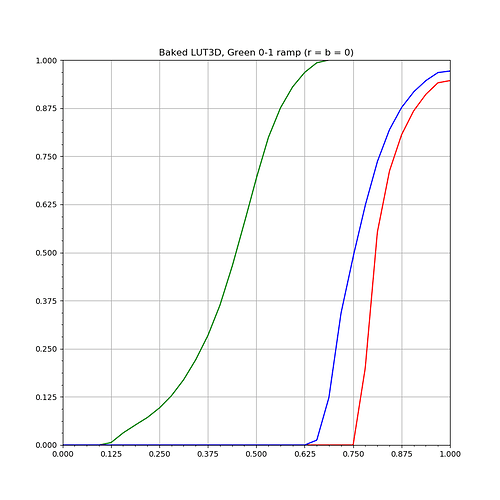 These errors occur at the boundaries of the cube, so are unlikely to produce visible artefacts in photographic images. The preview tier is intended for situations such as on-set, and the output of a camera is unlikely to produce ACEScct values of either 0 or 1.

UPDATE 2020-10-13
I have added more to the Colab following the last meeting to investigate if clamping the image values to those which could occur in a real image (ACEScct equivalent of 0-100 linear was suggested) improved the situation.

Unfortunately while doing this reduces the magnitude of the max code value error (99 instead of 116) it is still significant. I believe that it is because the CDL is still pushing values negative (and then clamping them to zero) due to the combined effect of the negative offsets and the saturation of 1.2. So you still end up with kinks in the curve either side of a colour which could possibly occur (although the colours which cause the largest errors are still unlikely from a real camera, because they have two channels at zero in linear AP1).