What Are The Advantages of Using ACES for Color Correction?

What are the advantages of using ACES for color correction?

ACES provides some key advantages for color correction over legacy workflows.  The most tangible benefit is that the ACES files have the capability to contain all color information and dynamic...

ACES provides some key advantages for color correction over legacy workflows. The most tangible benefit is that the ACES files have the capability to contain all color information and dynamic range of the original source material with greater precision than can be contained in legacy 10-bit files such as Cineon. ACES files put more highlight and shadow information at the colorist’s disposal during grading.

ACES uses the OpenEXR file format to hold 16-bits of scene data. Those extra bits are used to hold greater dynamic range and more colors with higher fidelity than other file formats and color encodings. ACES files can hold 30 stops of scene information excluding negative and subnormal floating point values (See figure 1 for the math). ACES is also capable of encoding all the colors that humans are capable of seeing (Figure 2). This means less compromise and with a wider palette of color and tones in your source files. That wider palette is particularly useful when grading on displays with higher dynamic ranges and wider color gamuts than traditional displays, but also allows for greater creative flexibility using traditional digital displays such as digital cinema projectors. 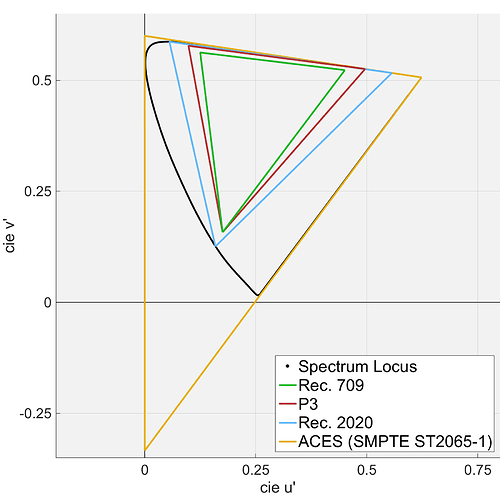 These benefits are also available from camera native file formats if your color correction system supports ACES 1.0’s Input Transforms. Look for the ACES Logo’d color correctors for this capability.

The ACES Display Transforms also provide unique benefits during color correction. Using the ACES Display Transforms while color grading means the original source material isn’t clipped or limited as it is with legacy Rec.709 and other output-referred workflows such as grading directly on camera native files. ACES files graded with the ACES Display Transforms retain their wide dynamic range and extended color information in a way that allows those source files to be more easily repurposed when additional output deliverables are required. For example, it is often the case that a subtle trim pass is necessary to repurpose a digital cinema “DCI-P3” master for Blu-ray release by simply changing to the Rec. 709 ACES Display Transform.
A properly implemented ACES workflow is designed to delay destructive image transformations until as late in the production process as possible. Legacy workflows often destructively transform image data much earlier in the workflow (See Figure 3). This leads to irreversible loss of dynamic range and color information. This unrecoverable loss of image information is inherent in traditional broadcast video workflows where the video model allows for only a single reference display. Traditional broadcast video workflows create display-ready code values directly out of the camera to minimize the need for downstream image processing. This production efficiency comes at the cost of limited ability to grade video images and severely limited ability to repurpose the content for displays other than the assumed broadcast reference display. 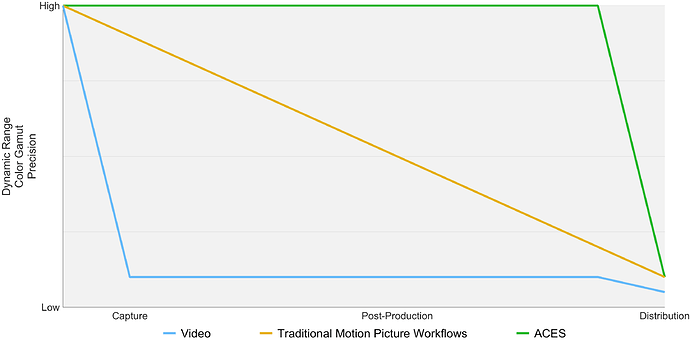