Here is the diagram I mentioned on the call today.

This is food for thought on what constitutes an “ACES show” which, at least at Netflix, has shifted from just “getting an ACES archive” to more of a holistic view of seeing the benefits of ACES throughout the workflow, and “everyone sees the same thing,” especially as the number of artists, locations, and displays on which images are viewed has exploded in recent years. 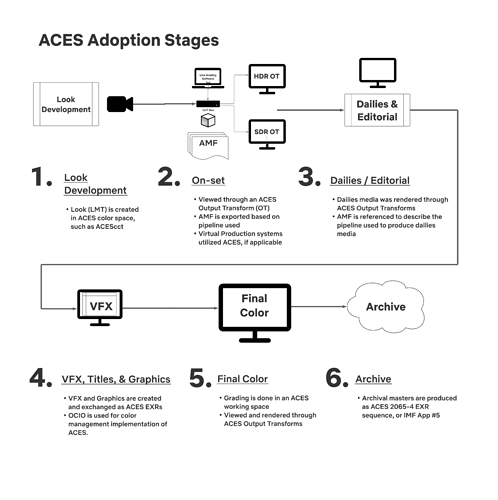 In addition, there are many workflow factors (budget, storage, software used, level of experience) which may dictate the stages in which a particular show can benefit from ACES. Some will get all the benefits, some will be partial, and we think that’s OK.

Is there a way to know which Netflix shows are following this diagram ?

This is a great vehicle for discussion, thanks for sharing. At the heart of this is what are we trying to communicate when we say ‘this show used ACES’? Is it that they used certain technical components, that they worked within the tenants of ACES or ?

Here is the original position piece on what is an ACES show…slightly more descriptive that what we presented in the meeting.

Current understanding of “What is an ACES Show?”

During this period when all the components of ACES are not finalized, we have considered a show as having used ACES if they:

We’ve considered on-set and dailies use helpful but ‘optional’ (and alone, not sufficient to call it an ACES show) since those processes are commonly outside of the image/color processing chain that makes it into the final show.

This has largely been on a self-submit/professional trust basis, although we often confirm with someone that knows the processing chain (producer, colorist, VFX Supv, sometimes the DIT, if they’re embedded in the choice). There have been instances where we have chosen not to list a show because the process described to us seemed to break the chain and not be in the ‘spirit’ of ACES.

If I recall correctly, this show Ratched was possibly managed with IPP2.

But I always wondered if Fear Street was using the ACES Output Transform ?

I see a similar behavior in blues as my CG renders.

Hi Chris,
Thanks for mentioning these two shows. I don’t have any information about them having used ACES or not. If I’m able to find out, I’ll post the info.

Thanks Chris C. for posting this. Just for additional data points (not saying this is right or wrong, just saying what we do) - For Universal Pictures (for now), we prefer that our live action productions do, at the minimum, what you are calling out as 4, 5 and 6 in ACES. We do allow shows to use a different grading working space like AWG LogC as long as they are still using ACES EXRs as the interchange formats for VFX and pulls.

We let the production decide whether they want to do 2 and 3 - those are optional on our “ACES shows” right now. It definitely makes it easier if they do 1-3 in ACES, but we are thankful for the color scientists at our post houses who can reverse engineer the dailies looks in ACES if the show is only doing 4-6. This summer, I’m working on how we are going to incorporate AMF and CLF into our delivery requirements which we will update later this year.

I think the 6 stages in Chris diagram are very helpful, With respect to “what is an ACES show” and being mindful that this is a necessary element to the ACES logo program, I think it is important to be clear about the purpose of the definition. We could agree that the most significant ingredient in many ways is stage 5 and that would be enough to make a show ACES.

However, imho the best reason to recognise ACES shows is to encourage wider, standardised adoption and for that reason I believe that ACES in and out of any of stages 1-6 should qualify as an ACES show. For example if stage 1 Look development has been completed in a strict ACES environment there is good reason for later stages to go ACES. My point is that the reasons for the Academy recognising ACES shows is not the same as those of a studio requesting ACES pipelines.

For transparency, my hope is that this would pave the way for on set or VFX service providers to qualify as ACES partners. If the emphasis is always on the final stages we could see a situation where only companies involved in finishing would be eligible, and potentially the situation where onset services are listed as working on an ACES show even though they did nothing in ACES, or they did not stick to the philosophy of ACES.
My suggestion is that there are at least two definitions of an ACES show:
A- a show that is finished in (full) ACES (stage5) and
B- a show in which one or more of stages 1-6 are completed in and out of ACES.

I like where you’re going with this @KevinShaw - my only comment would be if a show only did #6, I don’t know if that should qualify as an ACES show. Not to create yet another category, to me, that’s just an ACES archive. I know that in my Marvel days, #4 was super important - Marvel could easily work with 15 different VFX vendors and having a standard interchange with clearly communicated color was extremely helpful to keep color and image consistent.

@KevinShaw - Thanks for these comments.
The Service Provider program (proposed but not yet implemented) envisions on-set dailies, DI, VFX, mastering and other services being able to be qualified as ACES Service Providers…definitely on radar and something this Task Force will get to discuss and make recommendations for how to best structure.

That’s a fair comment. Honestly I am struggling with stage 3 editorial as well. If conform and online are considered part of stage 5 Final Color, and Stage 3 is defined as Dailies and Offline Editing involving proxies I do not see any scenario where Stage 3 could qualify an ACES show.

I personally don’t think there should be any such a thing as an “ACES show”. A common problem I have is that if any one part of the production or postproduction pipeline did not happen to use built-in ACES constructs, then someone on high will proclaim that it’s not an “ACES show” (or not “full ACES”) and therefore some other aspect, like the archive, should not be done with ACES. I would like to see us dropping this binary approach and embracing the fact that ACES can be useful in parts of the process even when not everyone has used default ACES choices. For instance, it is still very common for color grading to be done (in dailies, say) in a camera color space rather than ACEScc or ACEScct (pros and cons of which is a discussion for another place), but this does not preclude SMPTE-2065 from being the image file transfer mechanism or VFX from using ACEScg or the creation of a SMPTE-2065 archive.

Thanks for your thoughts John!

I would like to see us dropping this binary approach and embracing the fact that ACES can be useful in parts of the process even when not everyone has used default ACES choices.

Yep. That’s why it’s been so hard to define. A binary distinction doesn’t work.
Perhaps eventually it is better to phrase as made/finished “using ACES components” vs being an “ACES show”. Though ACES allows for “vanilla” ACES workflows, there is still plenty of reasons why hybrid workflows utilizing ACES components might be the more prevalent reality.

For instance, it is still very common for color grading to be done (in dailies, say) in a camera color space rather than ACEScc or ACEScct

I was previously going to chime in and make the argument that working space or grading space used should probably have the smallest impact on whether a production is qualified or disqualified as being “ACES”. For very practical reasons, one might want to jump in and out of various “working spaces” depending on the type of operation they are doing. If someone needs or wants to convert their data into any form ephemerally to make adjustments, I see no problem with that.
Furthermore, we sort of already opened the system to this when ACES introduced a second “ACES” grading space option with ACEScct. By allowing an option of working space, it now requires tracking of the grading space - so no need for it to be restricted to either of the two ACES choices.

Here is the Strawman for ACES List and ACES end ‘bug’ that we discussed in today’s meeting (8/30/22).
Comments welcome!!

ACES Show list and ACES Logo in Film Credits Status and Recommendations DRAFT v1a 8-30-22 This is a ‘Strawman’ for discussion, not a vetted delivery document! There are two types of acknowledgements of ACES usage in shows that are being reviewed...

This Strawman has been revised to address issues brought up in last week’s meeting. Items that are underlined are issues that we don’t yet have consensus on (at least in my opinion).