ACES configuration from Resolve to Fusion

I have an AlexaLogC3 footage (mxf) loaded in R15.

First issue:
Seems that in R15 I cannot select IDT per footage element (Right click in media element and ACES input transform…) and I need to select an IDT for all project (In Project setting). This is true or I misleading something? Seems that in R14 is possible to define IDT by a media element.

Seems to be like the footage was in AlexaLogC, I thought that when Resolve move from IDT (alexa) to ODT (Disabled) to get EXR in 2065, footage becomes linear and not log (This is correct?).

Third method:
Another method that seems to give a beauty footage (not the same results that changing IDT to ACEScct, seems to be more vibrant)

Can someone explain which is the correct method to work in ACEScg in FUSION exporting footage from R15 Arriraw AlexaLogC in ACES workflow ?

You should be able to override the IDT at the project level by selecting one or more clips in the media pool ( from the Edit page). All IDTs should be there and in addition there is a Project and a No Input Transform option.

For linear output should you not use ACEScg as the ODT using AP1 color space?

Here you can see a screenshot from R15 menu. I expect to see this “ACES input transform” submenu, but I can not see it in R15…Why? I don’t know.

It’s like Resolve export EXR in log ACEScc or ACEScct space instead convert it to linear 2065 AP0. It’s supposed that disabling ODT and LUT, Resolve must be converting EXR automatically to linear 2065 APO for exchange.

As you say for linear output I try to convert (in FUSION with OCIO) from IDT 2065 AP0 -> ODT ACEScg (VFX working space). I Don’t understand why I must use IDT ACEScc/cct AP1 -> ODT ACEScg instead. It’s not supposed that R15 export EXR in 2065? 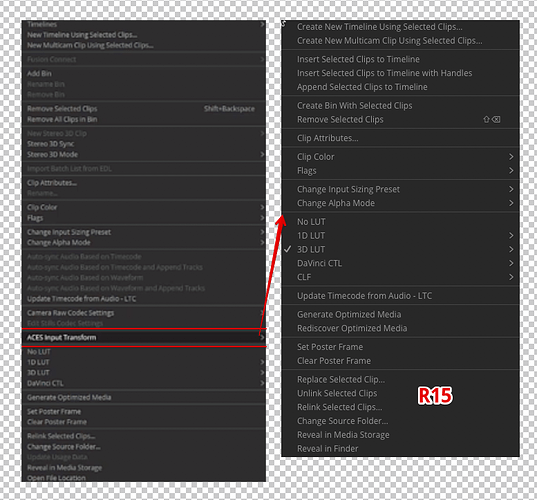 Very strange, I have no problem seeing the ACES Input Transform at the clip level.

Out of curiosity why do you have a 3D LUT enabled?

If I export EXR from “Delivery” module, seem to be linear (correct!)… but If I try to export with “Export VFX clip” then EXR are Log… with same ACES colorspace and IDT and ODT parameters…

Eden,
there shouldn’t ever be any EXR files “read” with an ACEScct/ACEScg IDT, or any EXR files “written” with an pseudo-ODT that bakes ACEScct/ACEScg in. They are both working spaces used internally by Resolve color manager and OCIO, but they should neither be rendered out nor viewed “raw” without an Output Transform applied.

Whatever is your workflow, don’t trust what you see: always do a roundtrip test to check consistency. In the simplest case (which is only valid for your Resolve +Fusion two-applications pipeline) try re-import into Resolve the files rendered by Fusion, using the default viewing pipelines of both software: if they match with the original, untouched footage, this is a good indication you are in the right direction.

Again: unless you are very proficient with the expectable results from a trusted and deeply-understood colour pipeline (which isn’t this case), never watch ACES2065-1, ACEScc(t) or ACEScg footage “raw” without an Output Transofrm applied on top.

p.s.: To be completely ACES-compliant, the OpenEXR files should be uncompressed, but this has well-known, trivial drawbacks.

Thanks for your response Walter.

Talking with a colorist tell me that I must apply IDT from the camera (Arri log C in my case) to EXR (exported from Resolved with ODT and Color Correction disabled) in Fusion.

I thought that when resolve export EXR (saved supposedly in 2065) must be matched with same IDT that file colorspace. But seems to be that I’m wrong with this concept. Thinking about this, files saved in “infinite” 2065 colorspace are not translated into nothing (maybe I’m wrong again) are the same (need same Alexa IDT) but now live in a bigger house (2065 instead Arri LogC).

It would be nice If I know how to read in what colorspace are those EXR from their metadata, but although I have tried to found it I not found how. It’s possible?

About OpenEXR uncompressed, It’s mandatory? What about apply a lossless compresion to those file to work with it? Uncompressed is really heavy. Change something?

Among other things (like no compression – read below) ACES-compliant OpenEXR files should also have a specific metadata inside the header self-declaring them compliant to the ST2065-4 standard by SMPTE, together with full metadata describing the ACES2065-1 colourspace and its AP0 primaries, so that applications know how to correctly interpret them from inception.
Reality is, however, that many applications don’t honour the above flags whatsoever. This is especially true out of non Product Partner software.

More and more software (as you mentioned) are instead capable of interpreting the raw footage from their source file formats (e.g. ARRIRAW vs R3D vs whatever) or even the colorimetric metadata within, and apply correct ACES Input Transforms (ex IDTs) accordingly.

As regards compression, many in the industry practically use compressed OpenEXRs, but if you want to stick with the standard (at least as it currently exists), no compression should be applied (as per ST2065-4)
If you decide to go on with compression, though, it should always be a lossless compression, otherwise you lose information/details in your shots progressively every time the file is saved (at a very minimum, 3-4 times per frame, with the workflow you sketched above).
No compression or lossless compression: whatever you pick, that is what comes with mid- to high-end postproduction.