I was compositing using fusion using the OCIO configuration.
I wanted to import it into Resolve for color grading and editing, I set Resolve to use Aces but I got a different result than in Fusion with the OCIO.

I also checked it with the SyntheticChart using ACES as the input colorspace and REC.709 as the output but Fusion and Resolve both gave different results.

Has anyone else had experience with this and knows how to fix it?
Also check ACEScg to double check 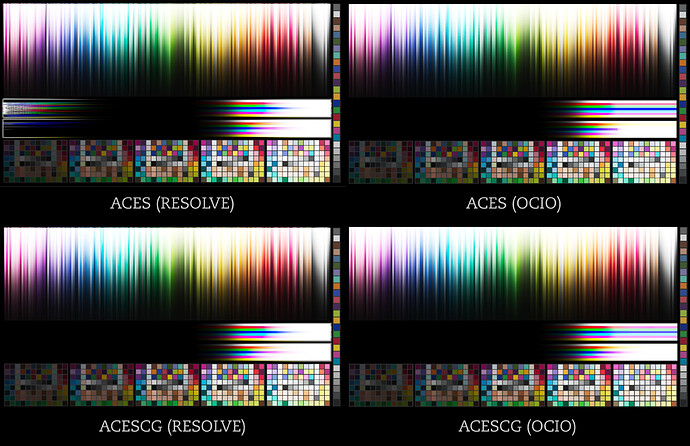 Are you seeing differences within the normal range of colours in photographic images? The synthetic chart deliberately contains extreme values, covering the entire half-float range (+/- 65504.0) at full saturation in each channel.

Resolve’s built-in ACES implementation is shader based, so (effectively) has no range limitations. OCIO is LUT based, so can only handle values within the defined input ranges of the LUTs. The ACES 1.1 OCIO config created by @Thomas_Mansencal increased the range covered compared to the previous ACES OCIO config. But is is still not unlimited.

@nick is right, this is a pretty extreme image (intentionally). It is rare for any implementation to match it exactly (but hopefully only at the extreme values where real images are very unlikely to go).

When trying to figure out which implementation is more “correct”, it is useful to compare to the reference implementation (CTL). You can find reference images through every transform with the official CTL package https://github.com/ampas/aces-dev/tree/master/images

The reference implementation (CTL) produces this image through the RRT and Rec. 709 transform: syntheticChart.01_ODT.Academy.Rec709_100nits_dim.tiff

Well I was testing it out with the actual image I was first testing it with but I found a temp solution but I don’t know if this is right since what I notice is that the whites really explode without a black and white level clamp before exporting towards Resolve.

Do you suggest to Clamp the levels or is this a big No no?

@XelaCreations: Which OCIO config are you using? As @nick mentioned, the latest is 1.1 and addresses partially some of those issues: https://github.com/colour-science/OpenColorIO-Configs

I am using the ACES 1.1 config from Colour-science

Thanks for confirming. I guess that you are affected by the LUTs capability at modeling properly the fully ACES dynamic range, not much you can do at this stage!

Something I don’t understand though is that this is mostly a limitation in the viewing pipeline portion, i.e. RRT + ODT/OutputTransforms. It should not affect CG data that you transfer from Fusion/Nuke to Resolve because ideally, that data stays in the scene-referred world as much as possible. Are you baking the View Transform into your imagery at any point?

In Fusion I just import the EXRs from Maya and set it as ACEScg rendered and then as final export I set it to ACEScg again so I can keep the colors in it and not lose anything. 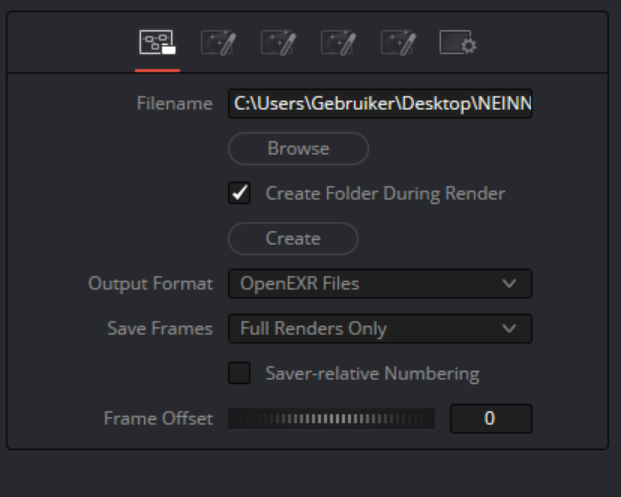 Right so all good then! OCIO 2.0 will address that in the future, we have to be patient for a little bit longer.

Okay so for now its best to just clip the blacks and whites to make it looks as in Fusion for in Resolve?

I would not clip anything because you will destroy your data doing that. Fusion is ultimately only a step in your process because you grade the final product in Resolve? If so, I would accept the fact that you will have differences with high intensity narrowband emitters, keep everything scene-referred with all the dynamic range and check in Resolve periodically.

That being said, I’m wondering if it is worth generating an alternative set of LUTs that cover the full ACES range, precision would be terrible in the SDR portion of imagery but maybe it would allow people to check narrowband emitters.

Thanks for your help though I think until OCIO 2.0 I will just do final color look in Resolve and just not look at the compositing final in Fusion atleast the colors are accurate.

Yes that is what I would recommend doing! It is quite unfortunate but you tangled right where the OCIO Config is not behaving properly and should not be trusted.

I often see people asking about using OCIO in the Fusion tab in Resolve - is there a reason to not just use a Resolve Color - ACES Transform node in Fusion?