ACES vs. ProPhoto For Still Images and Archiving

I am pretty new to ACES and I just started familiarizing myself with its concept and capabilities.
I don’t work in the film industry by the way but rather in digital photography and archiving as a color expert in terms of color correction authenticity/fidelity and reproduction.

Now after reading and watching some content on ACES I got that AP0 is so large that it covers the whole color gamut however it could be impractical when it comes to color manipulation and editing. Hence, a newer gamut came to light known as AP1 which is much smaller in compariosn but still covering almost (a bit more than) Rec.2020 but not as large as ProPhoto for instance!

So I started to wonder about the following:
if I am concered in preserving a master file, in terms of color, with the largest gamut possible ,which am using in my workflow for texturing 3D models by the way, then is ACES any good for me really or do I stick rather to ProPhoto?

Yet the bigger question:
if ACES(AP1) is the recommended and the practical standard, why not to go with ProPhoto instead as it is obviously much larger?

Could somebody point out why ProPhoto is out of consideration altogether?
I didn’t come across anyone mentioning it when they talk about ACES. Why did they ditch it as a wide-gamut color space after all and come up with ACES(AP1)? 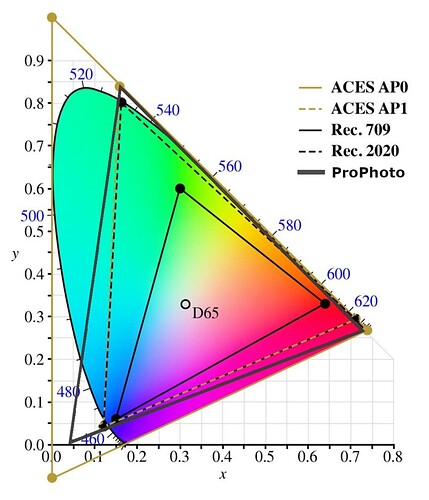 Since you work in digital photography, it would be best to stick with ProPhoto RGB for archival. No photographic stills camera applications are built with ACES workflows in mind currently. It is possible to use ACES in Affinity Photo or Photoshop with the help of OpencolorIO, however the workflow can be quite cumbersome, especially for a lot of images. It definitely isn’t as seamless as in video applications/workflows. If you use Adobe to process camera raw images you won’t gain much (if anything) by switching to ACES AP0. The internal working space for acr/lightroom uses prophoto rgb primaries.

In terms of why AP1 as a working space vs. Prophoto RGB. It comes down to negative primary values. AP1 doesn’t have any. Quoting from Wikipedia:

AP1 gamut is smaller than the AP0 primaries, but is still considered “wide gamut”. The AP1 primaries are much closer to realizable primaries, but unlike AP0, none are negative. This is important for use as a working space, for a number of practical reasons:

I think it would help to look at the history/development of both. 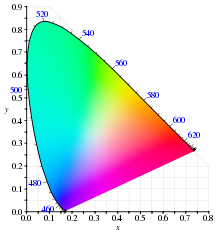 The Academy Color Encoding System (ACES) is a color image encoding system created under the auspices of the Academy of Motion Picture Arts and Sciences. ACES allows for a fully encompassing color accurate workflow, with "seamless interchange of high quality motion picture images regardless of source". The system defines its own color primaries that completely encompass the visible spectral locus as defined by the CIE xyY specification. The white point is approximate to the chromaticity of CIE D...

Prophoto RGB is also sometimes called RIMM/ROMM. You can read a bit about the development here:

The AP1 gamut (Figure 8) was introduced in ACES 1.0 to overcome the first two drawbacks
above; …

thanks for the replies.
it is true that mostly I am working with still images. However, my final master file is kinda one texture image (aka. texture atlas) which needs be imported and projected on a 3D model using the corresponding software, and most of rendering software do not really support ProPhoto or even AdobeRGB but rather sRGB, linear RGB and some of them ACES.

So given that, I was wondering, do I need to convert my texture image from ProPhoto/Adobe into ACES somehow so I keep color accuracy untouched?

PS: it is important for me to keep a wider color gamut as much as possible + preserving the color fidelity of the texture.

For a non-ACES 3D rendering workflow I think the only option is sRGB. For ACES you’d need to convert your albedo/diffuse textures to ACEScg (AP1/linear) EXR so they can be read in as such in the 3Dsoftware. As to perserving the data, I don’t think there are any surface colors far outside AP1 so if they are intended to be put on a 3d model and get lit by the scene all fidelity will be preserved unless they were pushed to less realistic values to begin with. 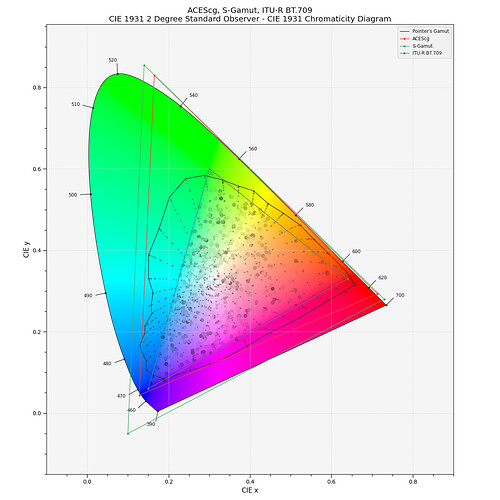