I am currently working on a personal project and wanted to try out ACES here before using it in client work. Unfortunately, I have encountered an issue and haven’t found the answer to my problem here in this forum or other sites. (It’s probably answered somewhere but I haven’t found the right keywords)

I have a 3D Animation rendered in Houdini using Mantra with OCIO Set to ACES 1.2.
I use the same config file in Fusion to composite.
I imported my passes and have the ACEScg to Output sRGB viewer LUT active. Everything works fine until I want to merge my animation on top of a white background, which initially looked greyish due to the highlight roll of (as far as I understand what I have read here).

So I use the OCIO Colorspace Transform after my greyish background and set the Source Space to Output - sRGB and my Output space to ACEScg. Now the white has a value of about 16 and looks white in the viewer as well. 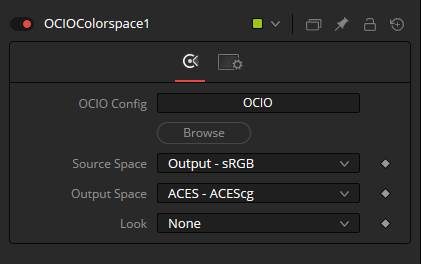 But when I merge my animation on top, the values of 16 completely eat away the edges of my Alpha.
I can decrease this effect by temporarily exiting ACES on my animation, merging it with my white Background in sRGB, and entering ACES again.
I attached two pictures.
One with the temporary exit and back to ACES: 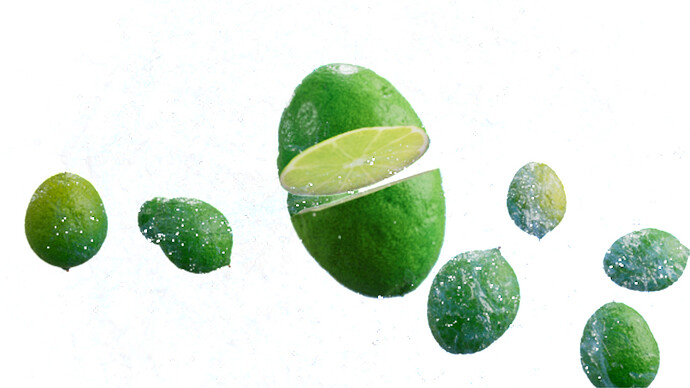 And one that stayed in ACES: 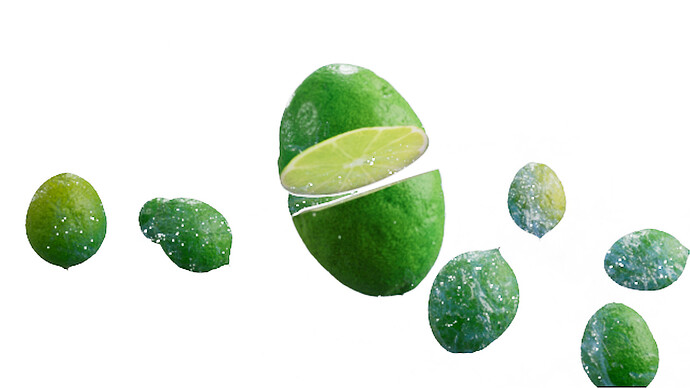 As you can see, much more visible edges.

The question is, what mistake am I making, or is there a better way of handling this? I feel like this is an unnecessary amount of colorspace transforms for something this simple.

Thank you all very much for your help! If I’m unclear with something then I’m happy to add more information.

Hello @Noah2 and welcome to ACEScentral,

I have just done a couple of quick tests and have basically reached the same solution.
What I would do is to merge the white background in a display-referred state to avoid the values of 16 to mess with my alpha edges.

In my test, I have added an OCIOColorSpace node ACEScg -> Output - sRGB on my exr render, merged with the white constant at 1 and then converted the whole thing back. This kind of operations (adding background of a certain clor) are usually operated in Photoshop for packaging and marketing.

Please note that merging/working in a display-referred manner would prevent you to use properly any nodes like Glow or Defocus.

Thank you @ChrisBrejon,
Very good to hear that you were able to reproduce it and that I didn’t screw up the color management completely.

If I understand you correctly, then my temporary transform to sRGB was the correct way of handling this?
It wouldn’t be an issue to add glow, defocus, and co before that transformation, but I am wondering if this would screw up any color grading that would happen later. (And possibly glows or blurs that a color grader might add)
As this is an animation that I want to have on a white background, I would prefer to keep the white background and send it in ACES to the grading, and not keep it in ACES, do the grading, converting to sRGB, and then adding in the background.

Very difficult topic, as I really like how my renders look in ACES (plus the advantages when dealing with real camera footage) but I am still struggling with tasks that I previously didn’t have to think about.

It would help me a lot if you (or somebody else) would still have the time to answer me these questions: 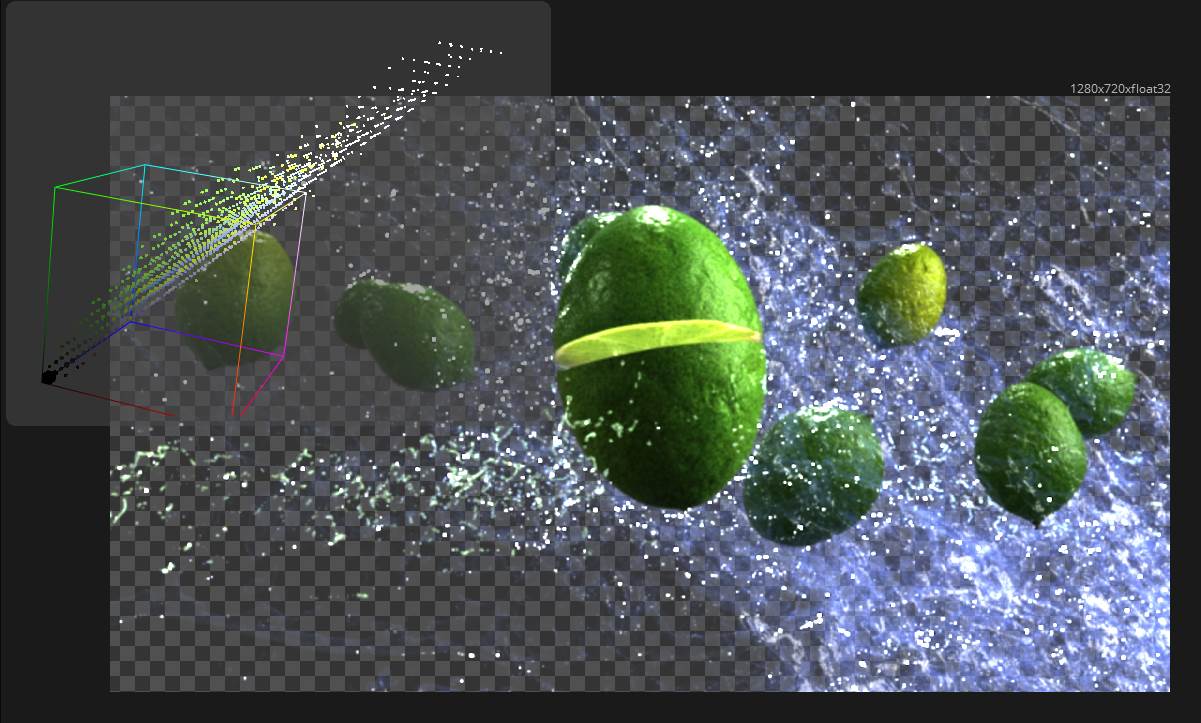 on a project I ran into the same issue and we created a solution for Nuke at least. With Fusion I am not familiar.

As @ChrisBrejon explained, you need to think about “white” a bit different in ACES or with any 1D/3D-LUT workflow for that matter.

First you could render your scene in front of a which backdrop in the 3D scene. When enough light hits the wall, it will appear “white”. Think about filming your setup in a studio with a white backdrop. You need an enough even lit background that it will appear white in your camera.

While you are still working scene referred in your Fusion comp in ACEScg and use the view transform ACES/sRGB, you are already thinking that you are back in Photoshop where 255/255/255 in 8-bit is white. This can be only true after the view transform, because only then you can work again display referred.

The workaround in Nuke that we called “display-referred merge” takes you out of ACES and moves you back into it with a potential loss of dynamic range and an irreversible compression of gamut.

In Nuke you do the following steps:
ACEScg–>Out_sRGB

When this happens at the end of the comp it may be a good workaround.

I hope this helps 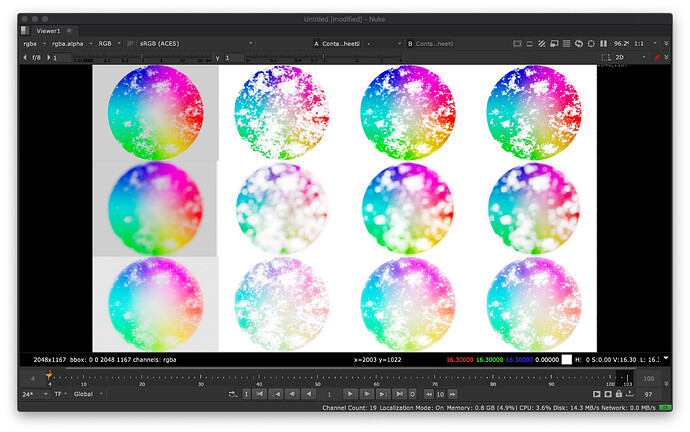 From left to right:

thanks for your script.
I think, as it was in our case, the overall question is not only display referred “white”, but white could be as well any predefined Photoshop(display referred) color background.

I am not able to get a clean merge result with the PQ merge, when I am using my test render from that time and one of the solid backgrounds that are in the .zip file.

The energy scaling merge gives me a similar result, but still the edges look different. What we tried at the time was to replicate in ACES the merge behavior as Nuke would be set the default color managment.

It is a tricky one. It really comes down to the fact that peak white does not naturally occur in a photographed scene, unless something is completely blown out. 16.3 linear is 6.5 stops above 18% grey, so you are effectively placing your foreground object in front of a bright light. If you did that in camera, erosion of the edges of the foreground would occur.

I am not able to get a clean merge result with the PQ merge, when I am using my test render from that time and one of the solid backgrounds that are in the .zip file.

Clean is kind of depending on the expectations but yeah it is certainly not as neat as your suggested variant or the energy scaling. Ideally, you would render against white and call it a day

If you did that in camera, erosion of the edges of the foreground would occur.

Exactly and it is what we see here, except that merging naively does not produce the blooming you would get on the edges!

Thank you all for your tips and explanations!
Seems like there isn’t the one solution that keeps all the information of ACES but is capable of merging my render over a (ACES) white solid.
Rendering it with a white background in Mantra would definitely be best for overall quality but I have additional plans with it where I need it separate (and I can’t render in full quality twice).
Have to do some thinking on how to continue this, but as this is an exercise to use ACES I will probably force myself to get it done in ACES.

Again…
A “fully white” solid (ACES) does not exist. You are working scene-referred.
A white piece of paper in a dark studio is still white, but you won’t see it without any light turned on.
How white the paper will appear in the camera depends on the amount of light and the exposure that you set.

What you mean by a “white solid” is the brightest white your monitor can display, so you are thinking display referred.

Try to imagine what you would do on a set/location:
Your plan is to take a “photo” of your scene, print it on a photo paper, cut it out and place it on a white paper again.

Only a quick iPhone experiment, but the real world effect of shooting against something that ends up display referred 100% white is clear: 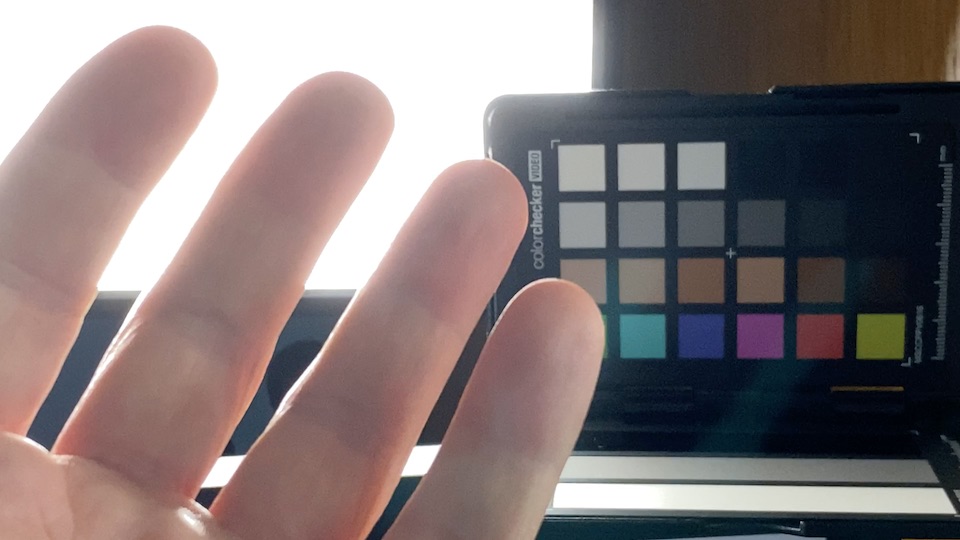 Thank you again @TooDee
I understood what you mean and how it would work in real life. By ACES white, yes I mean a color that looks white on my display when I use the srgb output ODT.

The same scene rendered in linear srgb and comped on a white background (with linear to srgb gamut display LUT) gives me exactly the result that I am expecting and I was trying to replicate this in ACES.

In the end I need the cut out separate and the cut out comped on a color that looks white in srgb. Not possible in real life yes, but I already had the desired result, I’m simply struggling to achieve the same in ACES.

By changing the way that Fusion merges the animation and the background I was able to achieve that the “white” doesn’t destroy half transparent pixels completely but I am still investigating what the best solution for this will be.

Thank you all again for taking the time to reply to my post.

I am always looking for ways how to describe the differences between scene referred and display referred workflows.
It is always tempting to mix both worlds at once and some real world thoughts can help to think what we are actually trying to do in this moment.
I was trying to write about the difference Display- vs. Scene-Referred on my website some time ago.
When I read it again, I feel like I should rewrite everything again.


I find it very complicated to put it into words.

Only a quick iPhone experiment, but the real world effect of shooting against something that ends up display referred 100% white is clear:

Thanks, I was about to do the same