Adapting a show LUT to ACES

What would be the best way to convince a DP (who has his own show lut) to migrate to ACES?

Make an RRT from the LUT?
or match grade it?

His LUt is pretty far away from the ACES base RRT so I’m afraid he’s going to be turned off by this.

Any info would be great!

My employer (DD) uses ACES workflows internally for all shows, though only uses the RRT when that is the client’s choice for the show LUT. Some clients and DI houses have re-tooled their show lut to an LMT applied immediately before the RRT.

For those shows that supply their own LUT, whose process space is likely different from that of the RRT, we set a role transform to the appropriate shaper, apply the client show lut as an LMT and omit the final application of the RRT+ODT in our viewing transform.

We justify this (to ourselves) by remembering that RRT stands for reference rendering transform – the academy’s “vanilla” reference for what a minimally destructive viewing transform might look like. As no show lut is “more correct” than another, just subjectively prettier or less pretty, omitting the RRT does not void your warranty (in our opinion).

Of course, shows that don’t use the RRT+ODT must be responsible for creating variants of their show lut for the range of displays used in color-accurate authoring (effectively creating their own ODTs).

His LUt is pretty far away from the ACES base RRT so I’m afraid he’s going to be turned off by this.

This is a plot of the curve of a LUT which when applied in ACEScct matches the look of the ARRI K1S1 LUT when viewed through the RRT and Rec.709 ODT: 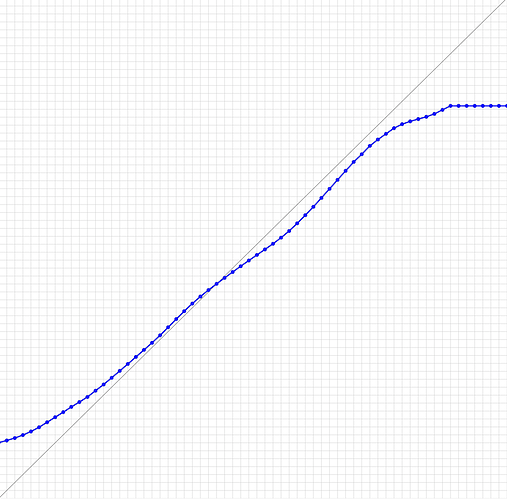 The K1S1 look is not a million miles away from ACES at all, and you can see that this is not a simple curve that you could match easily with a grade. And the colours are warped quite significantly by the LUT too.

I don’t have an HDR monitor here, so I am not able to test what the result of my LUT looks like when viewed through an HDR ODT. It certainly appears that it would limit the highlights.

Anyway, my takeout of this is that yes, you can make a LUT which matches the look of another LUT when viewed through the ODT targeting the same display the original LUT did. Maybe even any display with the same dynamic range. But to match it accurately you need a new LUT, not a grade, and you have to ask yourself what you are looking to achieve, and why you are doing it. If you want to use an ACES pipeline, you are probably better off taking a step back, and working out what the aesthetic of the LUT is, and then creating a grade to match that within ACES. You could plot a curve like mine as a reference, but should probably only match it vaguely, and reshape the top end so it continues up, rather than flattening out (as any ACES LUT derived from an SDR LUT is likely to do) so it preserves dynamic range for HDR.

The point where the curve flattens is the ACEScct equivalent of LogC 1.0. The K1S1 LUT only goes up to that, so there is no information on what “should” happen above that point. But working through a LUT which flattens like this will prevent you pushing the highlights up to HDR peak values with a grade.

Likewise, the LUT compresses the colours to only the part of the ACEScct colour space needed to produce the Rec.709 output colours from the K1S1 LUT. So this would also limit the gamut available though other ODTs. This emphasises why starting from an existing LUT is limiting, particularly as many look LUTs out there are designed for Rec.709. You are negating some of the benefits of ACES – multiple deliverables via different output transforms. Emulating the “feel” of a LUT with an ACES grade is usually preferable.

@nick
This all makes sense.
But you will find out that grading through two non linear processes will feel very different than grading through the process you want to simulate. The more non linear the forward process is the harder it becomes to simulate other looks (and grading behaviour) within that framework.

@daniele, can you clarify? Which of my two options are you talking about?

B. LMT designed from scratch to capture the vague feel of K1S1

Do you mean that even though with A, the start point will (within reasonable tolerances) exactly match the look of K1S1, grading in ACEScct through it will not feel the same as grading the original in LogC through a K1S1 LUT?

I acknowledge that this is true. Grading operations will still “feel like ACEScct”, particularly in the way the shadows drop to black as you lower them.

It depends what the aim is. If you simply want to have a base look in ACES which matches an existing look, I would argue that is possible. How useful that start point is as soon as you want to diverge from it is a more complex discussion. Hence my suggestion that approach B may be preferable.

Yes @nick I talk about A.
I would trade in accuracy to gain more smoothness on LMTs.
The K1S1 has strongly flared blacks, this for example is hard to simulate without giving up other things.
Also in the highlights I would give up the curve fitting and extrapolate at a reasonable rate.

I am just worried that LMTs flow around which are baked in the archive masters that compromise the image fidelity for later generations.

I would trade in accuracy to gain more smoothness on LMTs.

I would agree with you

I don’t want an ultimate match… So basically what you’re saying is just match it with a grade?

I was in the same situation, when the DP had a particular LUT that I wanted to translate into LMT values to use before my RRT. During my testing, I discovered that Light Space of Light Illusion can convert a LUT to an ACES. I’d like to hear about your perspective or viewpoint on this. I’ve never had the chance to try it, and I’m still unsure if it’s a viable option. 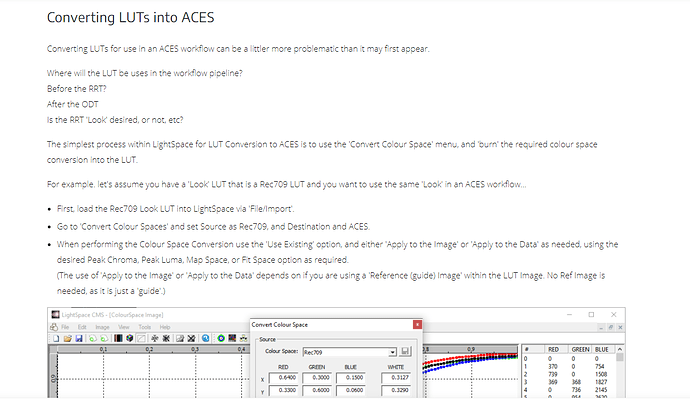 I tried this before with LS. Maybe they changed the process since then. But, it did not work as expected when I tried. I recently used Lattice to do this and it worked very well. Not a perfect match but close enough!

Thanks Charles. Good to know.