After effects to baselight ACES

So basically my goal is go get native GFX from after effects into baselight, no videos just a text layer with noise and glow. Recently add a colour pallet so I can see the colour shifts.

I am using OCIO in after effects and with colour working space set to none, 32 bit. I have an adjustment layer with ocio set to rec 709 convert to aces 2065 01. Also tried srgb to aces 2065 01 but makes no difference.

On top of that another adjustment layer ocio working as a display transform -input ACES -output -rec 709.

Looks fine when i turn on DT or render, the image is dark with blues shifted to purple. I can bring that same render in under the the display transform and looks perfect. But when I take it to baselight it just wrong.

Desired base light set up, read linear/APO
and work space in ACEScct AP1 with a viewing and mastering space of rec 709(1886) but they look over saturated/blown out, maybe gamma is too high.

But it looks fine in after effect when I put the ocio back on to read aces - rec709.

Im working with EXR and have tried coutless tests, what am I missing? I know after effects is ICC but i thought open colourIO solves this.

My next question, is for after effects to work in ACES would you have to create the ACES space first and then create? How would I go about solving this when all artists in after effects always work with a colour space set to non or rec 709 if we are lucky?

I’m not sure I completely follow your pipeline, but it sounds like you are compositing in linear AP0 in After Effects and in ACEScct in Baselight. If so, then the results will not match.

Baselight is very flexible in terms of changing the colour space at various points in the stack as needed. You should be able to insert Colour Space operators and recreate your After Effects pipeline in Baselight.

The other thing to consider is keeping the graphics outside the ACES pipeline. Converting graphics to ACES mean converting the pixel values to scene-referred values which produce your desired output. Often graphics are stylised in a way which could not plausibly actually be in the scene. Consider a white logo. Because an ACES Output Transform will only produce 100% white for bright highlights 6.5 stops above mid grey the scene-referred value needed to create the white logo is 16.3. This means that in compositing the scene, the logo looks like an extremely bright object, and will be composited accordingly. This is not normally what you want.

So in After Effects you can put the graphics on in a scene-referred space, above the Output Transform adjustment layer. Then render it out with all other layers switched off, and composite it in Baselight in the same way – downstream of a Colour Space operator transforming to your delivery colour space (which is therefore applying the DRT). This approach is simpler if you are only targeting one (e.g. Rec.709) deliverable. You need to build different graphics comps if you need to make SDR and HDR deliverables.

As for pipe line there is nothing set in stone as yet until I figure this out, so maybe if I give you some back ground you could better help me, so imagine this.

We have GFX that come in that need to go into baselight, these projects are beautiful but have a working colour space set to none, and no open color IO was used during creation. In the grade our aim is to work in ACES and also deliver the whole timeline based on one lut, however the lut is great over video but over GFX they, like you said dont look right.

So they would like the GFX to be converted after creation to input: ACES linear AP0, and they grade the video in Stack: ACEScct, the idea being that on delivery everything looks great on the one LUT. We set the final view to rec 709 but the GFX look washed out/ inverted colours, so we are exploring options.

I am trying to research my side as I deal with after effects, but not in creation just on the incoming traffic and then to pass on to the grade. If you had an after effects creation set to none, how would you go about getting this to look preserved in baselight ACES.

If you had an after effects creation set to none, how would you go about getting this to look preserved in baselight ACES.

As I said above, if I was only delivering Rec. 709, I would composite the graphic in “video” downstream of the ACES Output Transform. That’s the simplest way to get a graphic created as display-referred to work. 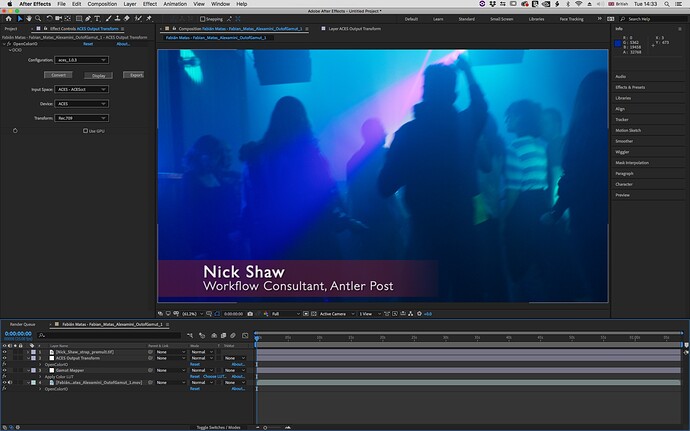 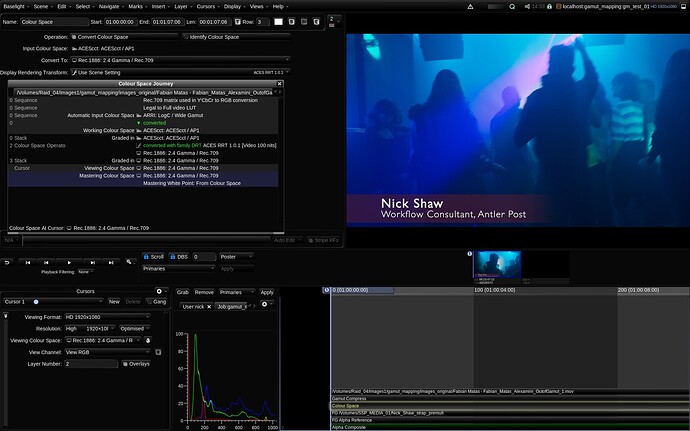 EDIT: There does still seem to be some variation between the graphics in those two images. I will investigate further. It looks like an alpha premultiplication issue.

Got to the bottom of the discrepancy. It was my mistake. I did not have the colour space journey set up the way I thought I did.

In order for the graphic to be composited in video space, you need to be sure that the Layer 0 Input and Stack colour spaces of the FG are both correctly set to Rec.1886. If your graphic’s alpha is premultiplied (to black) you also need to make sure you either check that box in Layer 0 or use “over - premultiplied” mode in the compositing layer. 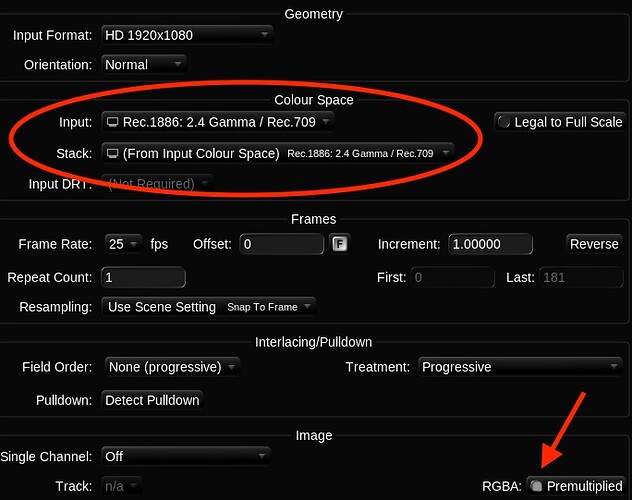 I should emphasise again that this is only an appropriate solution if you have been provided with Rec. 709
display-referred graphics, and your deliverable in Rec. 709 is the only one that will ever be required. If you need to future-proof your programme, then you need to use a scene-referred approach to the graphics.

If you had an after effects creation set to none, how would you go about getting this to look preserved in baselight ACES.

The problem with an unmanaged color pipeline obviously is that you are guessing what space the original comp/project was created in. I’m no expert, but theoretically this is the artist’s display space since that is what they are building off of, so likely sRGB or maybe Rec.709, but also possibly something wider as monitors are expanding their color gamuts.

If I’m not mistaken, an easy workflow to do the conversion should be to setup an AE project with the working color space set to ACES SMPTE ST. Import the project you want to convert, drop the comp(s) into a new comp(s), then apply a Color Profile Converter effect. Set the input space as whatever you think the project was created in (sRGB, Rec.709, etc), and leave the output space as project (since that is set to ACES). The comp should look correct as AE is already doing the transform for your monitor since you are now in a color managed environment. If it looks wrong, try a different input color space in the CPC effect. Export your EXR files; double-check all the color management settings for the EXR output.

Then in Baselight you should be able to set the input as ACES linear/AP0 (which it should do automatically if the profile is embedded). I don’t have a full Baselight rig to test this on, however, so unfortunately I can’t confirm that this workflow is correct (but in theory it should be).