All cats are grey at night? (render theory question)

There’s a saying “all cats are grey at night” which (among other things) expresses the casual observation that at night everything appears to be less colorful, more grey.

I could imagine that this could be because less light reaches our eyes, and thus less color, and that the same is true for a camera. Therefore, when rendering a night scene I will desaturate the objects lit with indirect light (the night sky) in comp, and keep the saturation from direct lights (a street lamp for example). I’ve often wished that the render would do this automatically, reflecting what a camera would do.

Not really an answer but I remember Daniele talking briefly about this in this talk at 43:49.

Roughly speaking a colour camera simulate the trichromatic vision of the HVS, i.e. the Cones (L, M, S). At low illumination levels, the Cones becomes not sensitive enough and the Rods take over. See Photopic vs Scotopic vision.

OK So if I’m following, our eyes see things less colorful than a camera does (because of rods and cones), and in order to get a camera to look like what we saw at night there needs to be some sort of Color Appearance Model in the DRT to compensate for the Hunt Effect.

That leads me to ask: does the current ACES DRT do that? Does the ACES 2.0 DRT with ZCAM? If so, am I correct that this would solve the issue not only for photography, but also for renders?

Unfortunately, it is not that simple, the low illumination vision, i.e. Scotopic Vision is mediated by an entirely different class of photo-receptor cells. You would need a camera specifically designed to record that type of images. As you can see the Rods sensitivity is somewhere between blue and green. 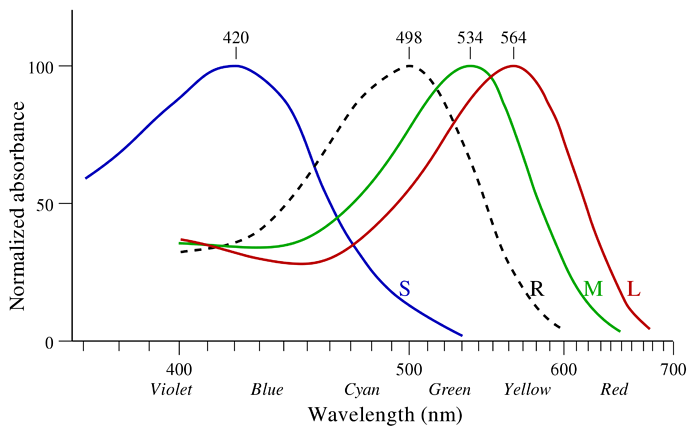 This is not related to Hunt Effect which models an colour appearance effect of the Photopic Vision.

the Purkinje Effect has been modeled here by Romain Guy. Maybe you can bake that into a LUT somehow.

Understood. So current cameras are not able to capture what our eyes see in the dark.

I do feel like I see this desaturation in photos somewhat. Is that true? That is, I know there is a bluish shift in color temp with photos, but is there also any decrease in saturation at lower exposures? I think I see that desaturation happening in photos like these (from the ACES OT VWG sample frames, so I assume there has been no color correction) 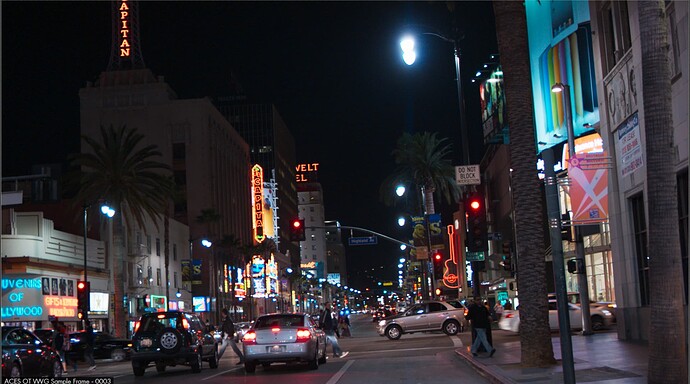 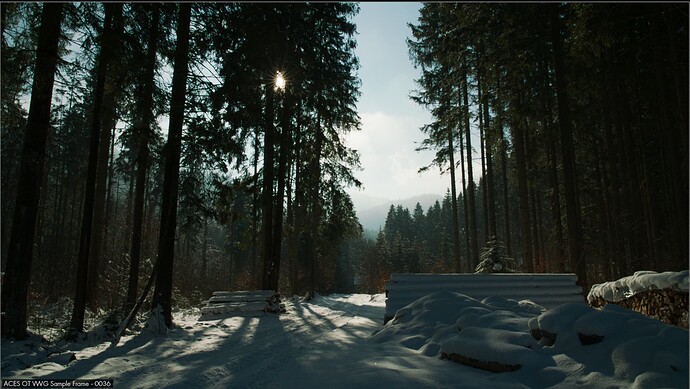 Thanks Christophe! Looks like they have added this Night Adaptation as a parameter to their color grading system. So following that approach, it might be preferable to have this as a Nuke gizmo or DCTL with a slider that can be dialed in by an artist, rather than as an LMT (or DRT).

The images produced by the camera should not desaturate unless a something does it during processing. You could take 1000 image at 1/1000th of a second, average them and it should not look dramatically different from a 1 sec exposure of the same scene.

Thanks Christophe! Looks like they have added this Night Adaptation as a parameter to their color grading system. So following that approach, it might be preferable to have this as a Nuke gizmo or DCTL with a slider that can be dialed in by an artist, rather than as an LMT (or DRT).

I don’t get why their implementation makes the image more blue?

Purkinje Effect claims that blue objects appear brighter compare to red objects under mesopic and skotopic vision.
Also not the same as the hunt effect.
As far as I know ICtCp (then probably ZCAM too) models the hunt effect.
Unfortunately in practice you get more negative side effects by doing this.

Really appreciate the education! This is fascinating stuff

What would y’all suggest as an approach to simulating this effect? I’ve been experimenting with desaturating the shadow area of an image using Jed’s zoneSat nuke gizmo. Any other tips or recommendations of how best to simulate this?

What would y’all suggest as an approach to simulating this effect?

I think this is really easy to achieve nowadays in color corrector. In Baselight you’d use Base Grade and in Resolve the HDR panel to skew shadows/blacks where you want, make them bluer or less or more saturated.

In my opinion if you want to create that effect because you think it looks cool, I say go for it. Same reason moon light is always “Blue” in movies even though the moon is literally just daylight.

But if you want to emulate reality keep in mind that human eyeballs will be watching your film. If they’re in a theater calibrated to 50-100nits white for SDR and you’ve graded to about 6 stops of dynamic range projected with your knee and toe then your range will be: 25-50 lux, 12.5-25 lux, 6-12.5 lux, 3-6 lux, 1.5-3 lux and 0-1.5 lux. Your lowest projected stop is already viewing a roughly accurate moonlit scene.

Scoptic Vision only starts kicking in around 10 lux so 4 of your 6 stops (60% IRE on a wave form) in a movie theater are already just starting to naturally desaturate in your audience’s eyeballs from the projection screen. If you attempted to emulate the effect of human perception, you would be doubling up the effect since your audience in the theater would be experiencing it naturally with a pretty substantial amount of the dynamic range of a projector within the mesoptic vision range.

If you want intense desaturation of the experience of a starless, moonless, cloudy night… there’ll be no “key lights” because that would blow a human’s night vision and Scoptic Vision wouldn’t be a factor anyway because a person would just see the street-light and black. Or everything would be very very dark and everything would desaturated together even your key lights would be deep within scoptic vision as well. There’s only a very narrow window where most of a person’s field of view is dark enough to be desaturated but also for some small light source to rise up into the color sensitive intensity without blowing out your night vision. So maybe as an effect something like a gunshot would be brilliant saturated orange but the overall grade would be quite desaturated cyan

In the end you’re most likely creating an artistic effect that no human would see.

That’s a good perspective, and helpful reminder of the dance between science and art.

I think this is really easy to achieve nowadays in color corrector. In Baselight you’d use Base Grade and in Resolve the HDR panel to skew shadows/blacks where you want, make them bluer or less or more saturated.

That’s good to know. Are you aware of a way to do this in Nuke as well?
I’ve been trying to cobble something together myself, but wonder if this wheel already has been made?

Are you aware of a way to do this in Nuke as well?

I have some tools in aces-looks/util/LMT_Tools/Nuke at master · priikone/aces-looks · GitHub that you can use to select a range of luminance (like shadows only) and then skew colors or desaturate. See Saturation_Masked.nk and Tetra_HSV_Masked.nk. But as long as you can create a mask that covers only the shadows then any number of tools can be used. Jed also has some zoned tools in open-display-transform/look-transforms/tools/nuke at main · jedypod/open-display-transform · GitHub.

Thanks, playing around with these (in particular Jed’s zoneSat and zoneGrade) I managed to cobble this together

Seems to work pretty okay for my artistic purposes. Entirely possible I messed up the math somewhere, but I had fun tinkering around as a personal learning exercise

In my opinion if you want to create that effect because you think it looks cool, I say go for it. Same reason moon light is always “Blue” in movies even though the moon is literally just daylight.

Some time ago, one of my colleagues who was always sceptical and keen of proper testing of things, wanted to test this idea out. Unfortunately he did not have a modern spectrometer but he was in the middle of the desert so minimal light pollution, similar atmospheric conditions.

He setup his camera and shot in clear daylight (I believe it was around noon) and then took the same shot in the middle of the night, he captured RAW footage on a Canon DSLR.

He then applied the same processing to all the images and was surprised that in fact Moon light is redder than sunlight, due to the spectral reflectivity of the moon surface reflecting less as you go to lover wavelengths, thus less blue of the sunlight is bounced back.

Yes, moon temperature is ~4000-4500K, I computed it once a few years ago using its reflectance and it was around 4100 I think. I will double check.