Clarification About Hue Skew and Path to White

I just wanted to make sure I was understanding some basic concepts correctly. The updated version of Cinema 4D now includes OCIO implementation and with that has included different tabs in which we can select colors: sRGB, Render, Display, and RAW. I set up a simple scene with 6 flat planes and a light. I have the exported animation below. I set the planes on the left to RAW rgb values for each primary (I’m assuming RAW in this case would be my render space which is ACEScg, but correct me if I’m wrong about that). Then on the right, sRGB values for each primary. I’m increasing the exposure of the light from -10 to +7.

So right now what I’m seeing is what Chris Brejon (and others) have described as a hue skew on the path to white using the ACES transform, correct? Where sRGB primaries are fading to white at higher exposures but exhibit a shift in hue along the way.
But can someone explain why the primary values selected using RAW (ACEScg, I believe) values behave so much differently?
There has been talk about this skew being addressed. If so, would an updated config.ocio file fix this, or is that fix related to something else that Cinema4D would have to address?

I appreciate the help with this! Oof, still so much to learn!
Thanks,
-zak

There has been talk about this skew being addressed. If so, would an updated config.ocio file fix this, or is that fix related to something else that Cinema4D would have to address?

I’m sure someone else can speak to the “why” of the hue skews. That’s over my head as a user/artist.

Fixing these skews is one of the goals of ACES 2.0 Working Group. Currently ACES is in version 1.3 and the hue skews remain, although they are somewhat improved by with the Reference Gamut Compression (RGC). RGC is in ACES 1.3 as a built-in LMT which requires OCIO v2.1 which currently most software don’t support (they will soon I’m sure). I don’t know specifically about Cinema4D.

Observe the differences in the following exposure sweeps of sRGB/Rec709 primaries. Even with the RGC the ACES 1.0 RRT still has skews with increased exposure, whereas the RED IPP2 does a much better job maintaining the hues in comparison. 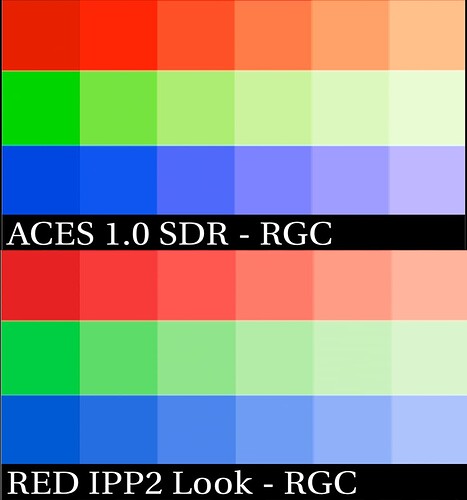 I wouldn’t use this for VFX work, but for a pure CG animated film it works pretty nicely. At least it tides me over while I wait for ACES 2.0

I think you meant to link to this for Pekka’s LMTs ?

@i_go_by_zak If you are interested in trying those DRT LMTs. You don’t have to implement them inside your OCIO configs. You can also just load the CLF versions as LUTs just make sure they process AP0/Linear data.

In AE this would be a sandwhich since file transform doesn’t have a selectable process space. 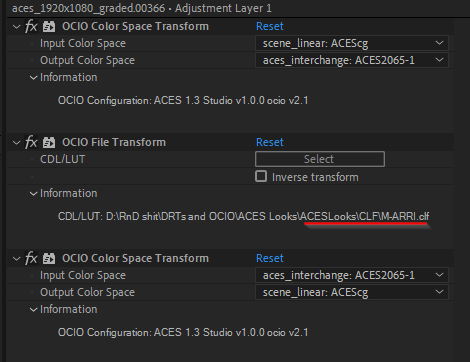 I think you meant to link to this for Pekka’s LMTs ?

Thanks for catching that. I corrected the link.