Hello everyone,
I just started to grade a small project filmed on a RED Helium.
Working on Resolve 12.5.6 I wanted to do this one in ACEScct. I like to grab stills of every shot in DC2/RG4 before I switch over to ACES, just to have something to compare. Most of the shots looked pretty good through the ACES pipeline, but some shots were looking really strange. 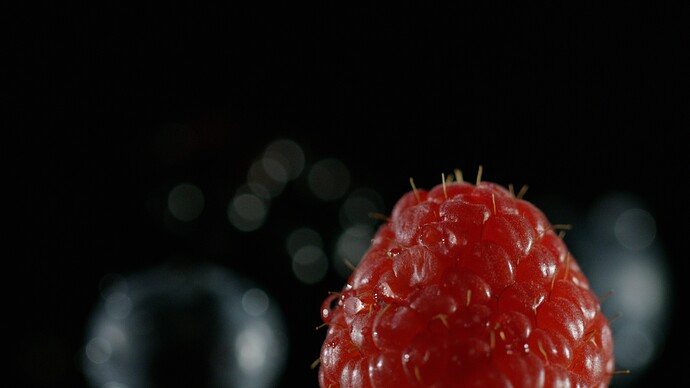 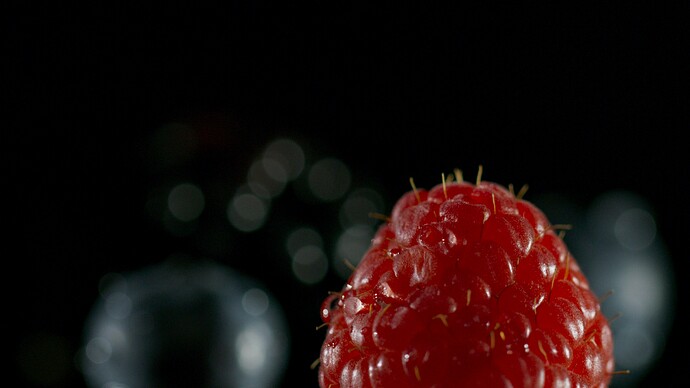 I hope it is visible with those JPGs. It feels like the red hues are breaking at some point very harsh and then loosing detail. On the vectorscope you can see a straight line on the red line (a small line on the greens as well) 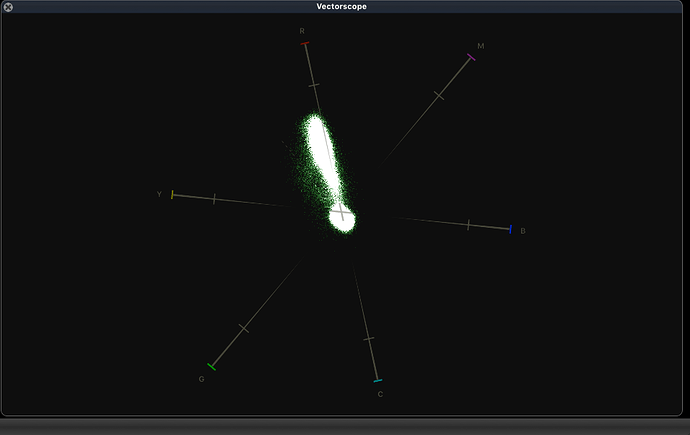 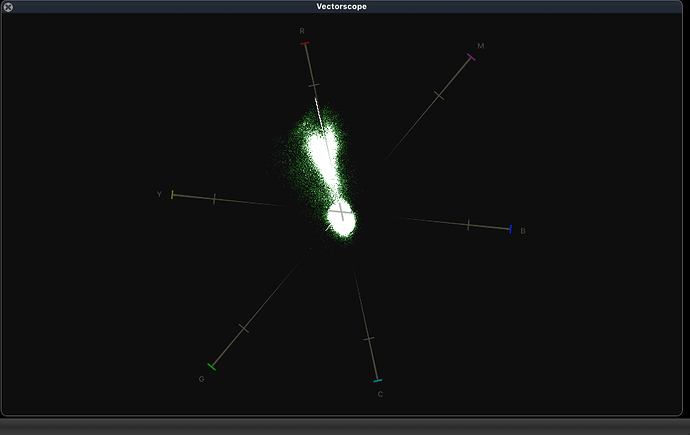 To be honest the footage is a bit underexposed, but this should not happen, should it?
The pure ACES image without ODT does not show those clumpy colors.
Is this related to the new sensor?
Right now I can’t work with ACES on this project because I haven’t found a way to get rid of those weird colors.

@nick Did you have to time to have a look on the file?
The project is done without ACES already, but I would really like to understand what is going on there.
Not least because there are more projects captured with a RED helium coming…

@nick Did you have to time to have a look on the file?

Not in a huge amount of detail I am afraid. It certainly does seem that some of the red colours in that image produce output colours through the RRT + Rec.709 ODT where the green and blue channels are both zero, resulting in the “clumping” you describe.

You may want to send the image as a sample to Graeme Nattress at RED, so he can examine it.

Yes please. Send me the R3D and I’ll take a look.

I will keep the file for a while in my dropbox: 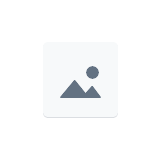 I have a suspicion what you’re seeing is from the RRT, but now I can test that hypothesis with the frame you sent. Thanks!

Hello again!
Did my uploaded file help you? The problem still persists and unfortunately I found the same issue with an other project, again RED helium and extreme red color.
As long as this is not resolved/clarified I feel kind of unsafe to start a new project with the ACES/Helium combination.

I don’t have too much conclusive to say other than that I think what you’re seeing is just a difference in the renderings.

I did process the R3D to ACES and took a sampling of a region of the raspberry. Below is a graph of those values plotted on top of the AP1 primaries and DC2 primaries. 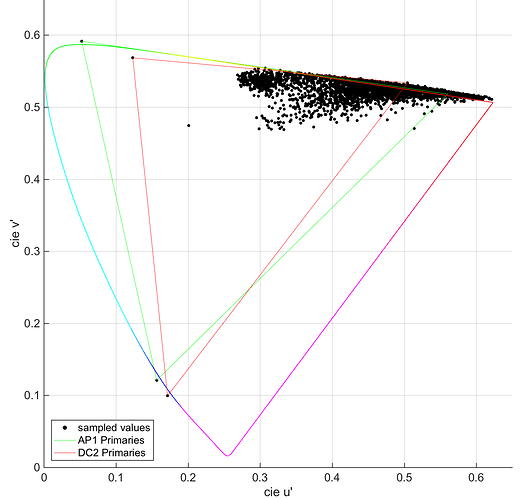 To compare what happens through each rendering in a different manner than the vectorscope, I sampled the same region of interest from your supplied output .jpgs. (Side note: my ACES processed image to 709 doesn’t exactly match yours, but that’s probably attributable to a number of different factors, including we used different IDTs. I’m gonna leave that difference out of this for now, because my result also showed the “line” clumping on the vectorscope similar to yours)

Treated as 709 code values, the DC2/RG4 result plots like this: 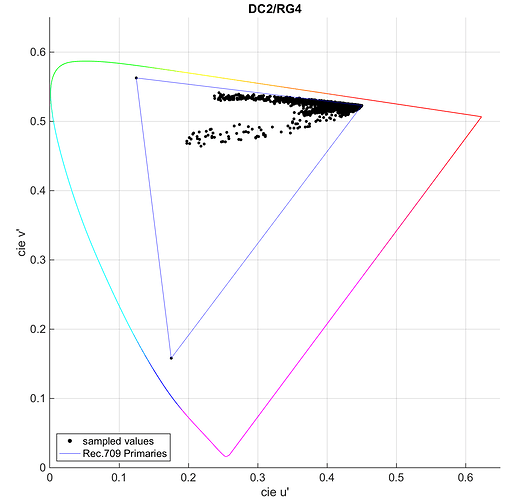 The same region of interest sampled from ACES_709.jpg, you can see a bit more values slammed up against the 709 boundary. This is probably the same clumping you’re seeing on the vectorscope - indicating values clipped to the 709 boundary. 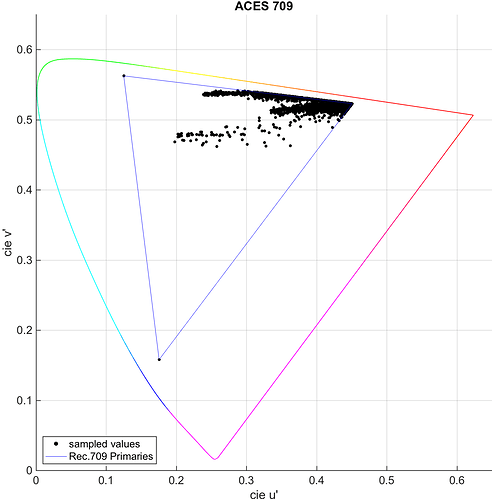 I believe this is just a difference in the renderings that you are seeing, and the clumping is a side effect of the AP1 rendering primaries.

Hi Scott,
Thanks for your detailed answer.
My problem is not only that I don’t like how the picture gets rendered out of the box with ACES. The bigger problem is that one cannot grade it as usual.

ISO set to 1600, added a heavy green tint to make the problem obvious: 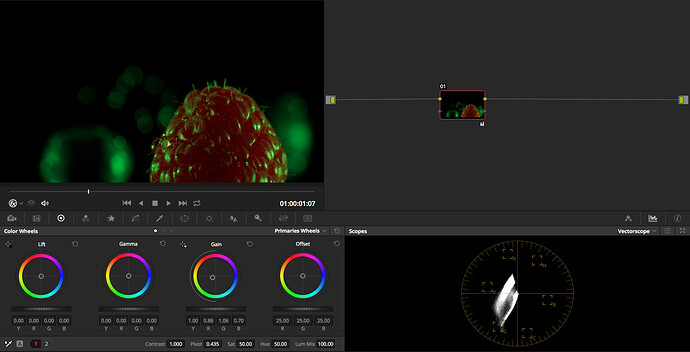 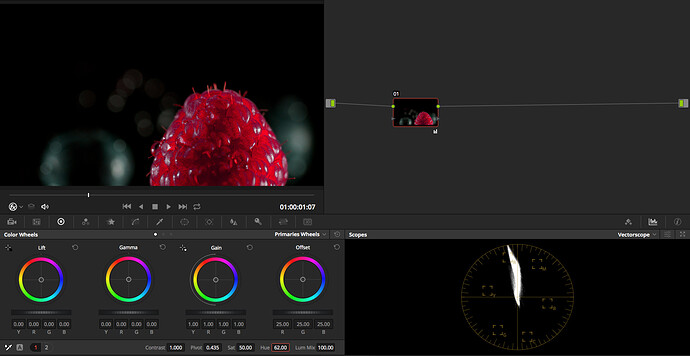 As you can see those clumpy colors are really behaving strangely. Imagine the clients wants the raspberries to be more pinkish (which was the case)… Without ACES those adjustments are no problem at all.

Meanwhile I had the problem again with an other project. Rear lights of a car shining into some faces. Unfortunately I am not allowed to share frames, but I was not really able to grade that image. As soon as I did some small adjustments the pictures started to fall into parts.

Soenke,
did you try applying “highlight fix” in aces?
It MIGHT help you, especially with car lights.
I just finished colouring a short film with tons of various lights in it, “highlight fix” fixed it for me every single time…
Hope it can help.
Good luck!
best regards,
Nurali Kushkov

Hi Nurali,
unfortunately the highlight fix is not doing the trick in this case. The fix helped me a few times in situations with highly saturated blues, but this seems to be an other issue.
I am still skipping ACES until this is clarified ;(

Hello again!
After hearing the presentation of @cmlgeoff about cameras in ACES at the IBC I felt like I have to revive this thread again. I am still checking whether the problem still persists from time to time.
I can’t believe I am the only one having this problem. Do you have any updates?

What did I say that triggered this off?

I know that the RED material looked, err, less impressive than some of the other cameras but…

Well exactly that not so impressive looking RED footage in general. And I felt like the red colors went especially crazy while overexposing.
Didn’t you say that you are going to make your camera tests public somewhere? If so, where can I find them? Would be really interested!

All the camera tests I did are at either www.cinematography.net or www.cmltests.net
The second address has all the RAW footage from all the cameras available for download.
This site is 2018 only all earlier tests are at www.cinematography.net but accessible from cmltests.net
Pre 2018 the files are in the form of EXR’s from a few frames. From January 2018 complet RAW files are available.
They are of course extremely large files.