It’s a useful tip putting the OCIOColorspace node after the MediaOut node, so it does not affect the image sent on to the Color page (resulting in a double-LUTted image). But as you say, It is a playback speed killer.

If you apply the OCIOColorspace as a Fusion Viewer LUT, that does not have the playback speed hit. I’m guessing it’s a playback optimised version of the transform, which does not need to support floating point output, as it’s only going to the display.

However the Viewer LUT is not applied to the SDI output (anybody know how to do that?) and therefore you see ACEScg there. So it may be useful to use a combination of the two approaches – using a viewer LUT to see the image on the UI monitor while compositing, and having an additional OCIOColorspace node after the MediaOut, which is switched of most of the time, but can be toggled on in order to check the image on the broadcast monitor, using cacheing for real-time playback.

(Caveat: I do not claim to be a Fusion expert, and I do find the way the Viewer LUTs work slightly confusing) 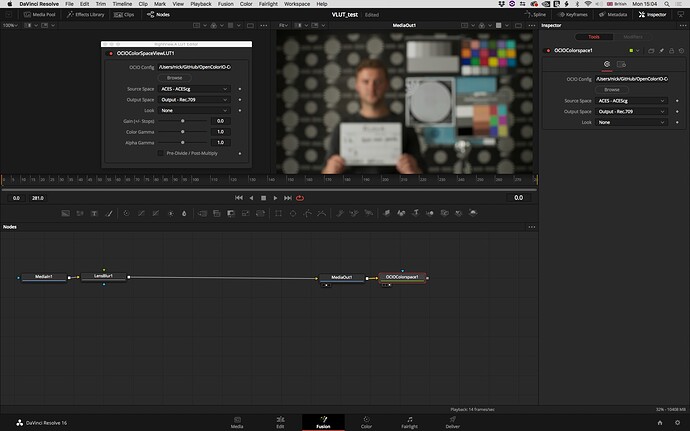