I’m working with Blackmagic RAW footage in Resolve. I’m converting that footage into ACES-2065, exporting EXR’s for reference in Blender, and then bringing back the ACEScg VFX elements for compositing in Fusion.

The client wants to grade with a LUT applied to the RAW footage as it would appear original debayered using Davinci YRGB color management. Is there any way I can convert the final VFX shot out of ACES to get back to that ‘original camera negative’?

Let me know if you need more information or better explanation. Thanks!

good to see you here. How are you?

It’s not the first time that there is a difference between un-colormanged and colormanged modes in Resolve. I tired this with Resolve Studio 17 beta5.

I had to stay in DaVinci YRGB, converted the Blackmagic clip with Gen 4 Color Science to BM-Film, then use a color space transform to convert to ACES and export 2065-1 EXR files.
Next I load in the EXR files back in Resolve and converted back to BM-Film, did a primary grade and applied a LUT to both clips, the original BM-RAW and the ACES EXR files.

There is a slight difference that I could not get rid off.

The moment I exported the EXR files in a ACES 1.1 configuration, the results were more far off even.
I find it very confusing with that many BM color science generations, each camera has its own color space and gamma curve.

Where is a Blackmagic IDT? This would solve a lot of problems.

I hope this helps. I did not try to use Fusion in the middle as well.

Hey Daniel! Glad to see you helping so many here. I’m doing well, thanks.

Yeah, it’s rather confusing all the various BM color spaces and gamma curves. For this project the footage is from the Ursa Mini Pro 12k and I can’t seem to find a lot of information on the color science of the RAW files.

I kept Resolve (Studio 17 beta5) in the default YRGB uncolormanged mode. Set the BRAW settings to Gen4 (Blackmagic Design / Blackmagic Design Film) to see the flat image, then with a Color Space Transform I converted the BM-Poket_4K_Gen4 / BlackMagic 4.6 Film to ACES / linear. The rest of the settings I kept with the default values. Maybe here is another chance to get right 100% right. I need to try it out again.

The exported EXR files I loaded into Resolve again and used a Color Space Transform to go back from ACES to Blackmagic Film. There are so many entries, and not all of them are available everywhere in the software so this is rather confusing.

I hope this helps. Otherwise I can send you the Resolve project, the clip is freely available from Blackmagic.

An OFX Color Space Transform to ACES is not quite the same as the corresponding IDT (compare the OFX ACES Transform version of the same thing) as it does not include a chromatic adaptation, which an IDT needs.

Hopefully the full set of BMD Camera IDTs will be added at some point.

In the meantime you need to use slightly complex approaches, such as first using an OFX Color Space Transform to go to a colour space which has a D65 white and for which an IDT is available. Likewise, to go from e.g. ACEScg to Pocket 4K Film, you would use an ACES transform to go from ACES cg to something like RED Wide Gamut/Log3G10, and then a Color Space Transfrom to go from RWG/Log3G10 to Blackmagic Pocket 4K Film.

Thanks for the explanation, I could not find out why the results not match. Luckily at work I don’t have to deal with BM footage. I was intrigued to see if this “hack” would work somehow.

When we have a Resolve grading that is no color managed, we usually ask in Comp for Nuke for DPX (camera log), comp in ACES and send DPX (camera log) back to Resolve. As long as the plate stays in the same range of exposure there is not much loss when going back to camera space.
Still, I would rather like to work only with EXR files though.

Yes, please BM, an IDT would be great and EXR exports that keep the metadata when exporting and read the metadata back in as well. It is really a pity.

I have a work in progress set of Blackmagic camera colour spaces here in my fork of Colour Science for Python if anybody wants to build their own IDTs. Currently they use 1D LUTs extracted from Resolve’s Color Space Transform OFX, but myself and others are working on optimised curve fitting.

Thanks for your assistance. To be honest, I’m not at a point to understand all the technical details completely but I’m sure your feedback will help others.

I also wanted to share the solution I used for this project. In the end, I wound up using the VFX I/O LUT “BM 4.6k to Linear” at the start, rendered CG out of Blender in Linear, comped it all in Fusion, and then used the VFX I/O LUT “Linear to BM 4.6k” to get back to the original RAW. Then I was also able to load the client’s LUT in the Fusion viewer making it nice and easy to turn on and off.

My solution is pretty hacky and definitely not ideal but it worked to get me close enough.

Ive been doing a lot of experimentation with BlackmagicRaw and all that and there are massive issues in my opinion to how resolve handles their own colourspace stuff.

But the first thing you need to understand is that ‘Going back to original debayer’. could mean literally anything , for any raw format out there. For BM that depends on what was set in camera, what resolve version and camera firmware used e.t.c as you can see you have a million different options in the Raw debayer settings, the flat image it shows you by default might be totally different given another resolve version.

Then for the 12K camera specific it will usually default to ‘gen 5 colorscience’ which resolve does not even have a colourspace transform option for, and thats a different gamma ! and as you found out , the whole naming between raw debayer and CST nodes is very inconsistent and confusing. So you can debayer straight into aces but there is simply no way to get back to the Gen5-blackgicFilmLog/BlackmagicWidegamut (or whatever that is supposed to be called.)
Gen 5 left , Gen4 right. there is also some other fun buttons like “gamut compression”… 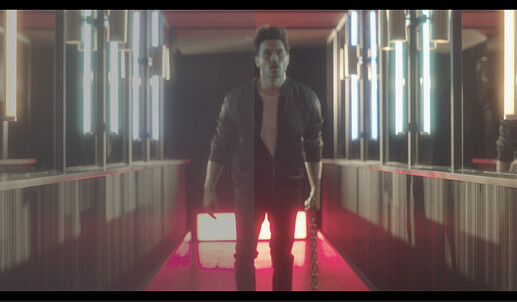 Also even when you use the gen4 settings throughout, I was never able to match that to a ACES debayer in resolve perfectly, so something is inconsistent… I think its mostly due to those settings but honestly I stopped bothering trying to find out, just use Alexa LogC/ AWG and all is well. 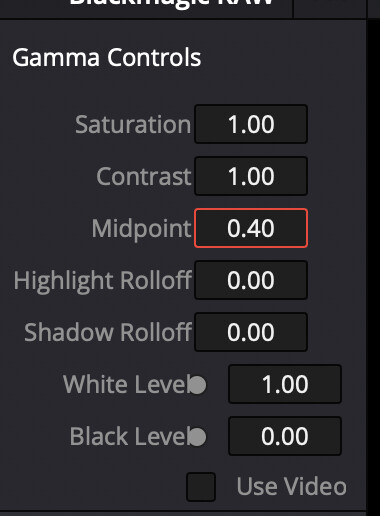 I think for that reason Blackmagic has just enabled to “Debayer” (we aren’t really demosaicing braw… isn’t that raw… its basically just a DCT compressed image like pores or jpeg… but thats a different topic) straight into LogC/Alexa Wide gamut, so you can adhere to a more solid workflow. But that needs to be decided and communicated. also when you choose Alexa LogC to debayer into the “gamma controls” magically dissapear. because that would be ridiculous to use.

Luckily the new 12K doesn’t even shoot prores anymore. so that problem is gone now.

But now you are dealing with a client that thinks when he drags a braw clip on his timeline thats the 'flat camera original" I mean there even is a comparison like that on Blackmagic’s own website…
so client has made a LUT based on a image you can’t go back to, you know what , just match it by hand, get a DPX of the export and go full-ninja , I have to do this a lot even on big studio shows, as CDLs get lost in translations, wrong LUTs get send to me e.t.c . all just to make their dailies -running-avid people happy (rant over

, its just a simple lookup table, no magic fairy dust, and most likely its for dailies only and not for final output so go nuts, nothing wrong with it.

Completely reminds me of how crazy all the RED stuff was before IPP2… really baffles me that Blackmagic can’t get their act together , I have had some talks with BM people about this, but it seems like one hand doesn’t know what the other hand is doing …