Hi everyone! I know there are a lot of threads discussing the workflow in ACES with nuke, believe me, I’ve done some reading but I haven’t been able to find the answer.
We’re a medium sized studio in Colombia, we’re implementing ACES in all our workflows and the interactions between VFX and color grading has been painstaking. here’s our typical workflow.
We’re shooting in siny F55 cameras, SLog3 and the compression is Xabc
VFX receives EXR sequences from editing, we would typically receive the sequences and read them as SRGB. But now in this workflow, from what I’ve read, we shoud receive the EXR sequences as Linear and read them as such. then we do our work and the render output should be the same as our input. All our cg work is rendered in multchannel EXR sequences using Maya’s OCIO ACEScg workflow. and our stock footage that usually comes as srgb should be graded to fit in the ACES much wider gamut.
My main issue is that the colorist sugest we should get the clips as ACEScct, but when doing so, we get a very weird color when reading it in Nuke, and almost all of our stock footage has to be shifted in color to get the integration to that weird color.

Please, any help would be much more than appreciated! Thanks everyone in advance

I am having problems to really understand your problem.
Maybe you can show some images or screenshots of what your problem “looks” like?

And it would be helpful to explain your image pipeline for ACES:

Here are some suggestions for a full ACES workflow:

First of all, thank very very much Daniel. You’re being amazingly helpful. Let me answer you first.
We’re grading in DaVinci, and we’re also grading in ACES and yes, Nuke is set to OCIO and ACES 1.1
I’m attaching a screenshot of a shot, But as you can see it’s pretty contrasted, and we would normally work with the washed up linear files before we began trying to implement ACES, this is killing us because it’s like if the shot had been color graded already which makes our compositing even harder.

Thanks again in advance 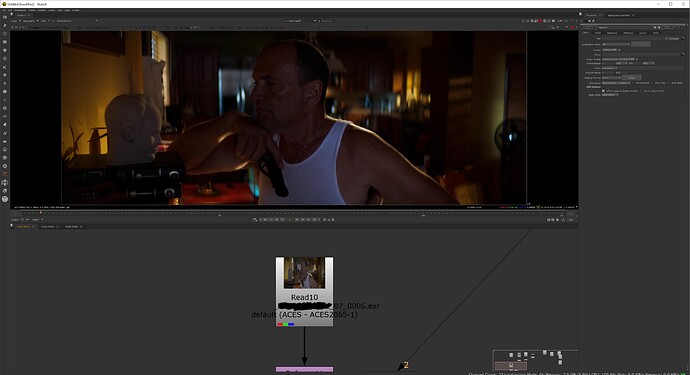 It looks perfectly okay to me.
You use the viewer gain and gamma slider to “see” into the highlights and the shadows while you comp.
If this shot is too dark for your taste, you could raise the exposure in Resolve (and maybe color balance as well in this step) and use the pre-balanced result in Nuke for working.

If you are used to “washed up linear files”, then you made your work much harder in the past as you should.

And the screenshot is not color graded, it is just presented to you with a proper view transform so that you can actually judge the image.
I just recently wrote about this topic " Unfair grading comparisons" here.

Try working with the shot like it is now, I think it doesn’t take long that you get happy to work that way very soon and don’t want to look back anymore.

I would suggest the following working steps:

From what I can see you setup everything right.

Thanks again Daniel,
So if I understand correctly, I should stick to this workflow. It’s gonna be rough while I get used to it. Just 2 quick questions.
1 In the first answer you say

Meaning we should not use ACEScct??
And seconf question, regarding stock footage, it has happened to me (specially with muzzle flashes) that I deliver the shot, and I see it being yellow and well composited, but when the color grader works on it, the yellows turn to purple or red. Any heads up on why would that be happening??
And once again, THANK YOU

I can only recommend not to rush and change your workflow from one day to another and switch to ACES. Depending from what kind of workflow you are used to, it might take a while to get used to it. You need to test if it works for you and how.

1:
no, I only meant, EXR files should only contain linear data and not log data.
Resolve (ACES) takes ACES-2065-1 in, transforms it into ACEScct for grading, then back out to ACES. But you don’t “see” this. ACEScct is the working space in Resolve, in the same way that ACEScg is the working space in Nuke, Maya, Flame, etc. by default

2:
Have a look in Nuke at such a frame in the viewer and gain/gamma up/down the shot to see how it would look in a different exposure and with a different gamma. Is it also happening there?
Again, a screenshot would be helpful.

I would recommend to read the ACES Primer under Resources/User Guide, if you haven’t done so. There you will find explanations about the different flavors of ACES color spaces.

Sir, you’ve been more than helpful. Thanks again

Hi Daniel, I would just like to emphasise that there is no need to export ACES cct, actually it will complicate things. When you bring an ACES (linear AP0) .exr file to Resolve it gets converted to ACES cct for grading and then back to linear on export unless there is an ODT applied. This is the natural behaviour. Even without concerns about encoding (ACES cct) log files in the .exr wrapper, such a workflow requires extra steps to stop Resolve converting to ACES cct twice.
I suggest that you check your pipeline is transparent - just round trip a file between the systems without changes and make sure they come back unchanged.
sRGB can be challenging since it is not scene linear to start with, so it will be hard to match the dynamic range of the sony cameras, however if you are only going back to sRGB/ rec 709 the differences at the output should not be a problem