There is no HDR or HDR 10-bit monitor that cannot display ACES / ACEScg ?

Both AP0 and AP1 have non-physically realisable primaries, thus making a standard display that fully cover them is impossible. You would need a display with enough primaries to cover the spectral locus for AP0 and the intersection of the spectral locus and AP1 volumes.

What do you mean by AP0 and AP1 ? Are you saying such a monitor exists ?

As @Thomas_Mansencal points out, that means neither are appropriate as physical display primaries.

There are some monitors that take a flavor of ACES called ACESproxy into the monitor and apply the appropriate output transforms for display. I think that’s what you may be looking for.

Can you give us more information about your use case?

I was hoping a monitor exists that will display ACES / ACEScg full color. From my understand most typical monitors obviously will display ACES and encode the file in the ACES format but will not accurately displace ACES color profile (Rec2020). What does one look for in the monitor specifications, simply ACESproxy ?

What is meant by primaries ?

Also from my understanding ACES is derived from Rec, but enhanced to more or less Rec2020 ?

From my understand most typical monitors obviously will display ACES and encode the file in the ACES format but will not accurately displace ACES color profile (Rec2020).

I think you are conflating a few things together. ACES is a colour encoding system and as such offers, various colour encodings built mostly on top of RGB colourspaces defined by a set of primaries, whitepoints and transfer functions.

The primaries chromaticity coordinates define the gamut (the triangle of colours) that can be encoded by a given RGB colourspace: 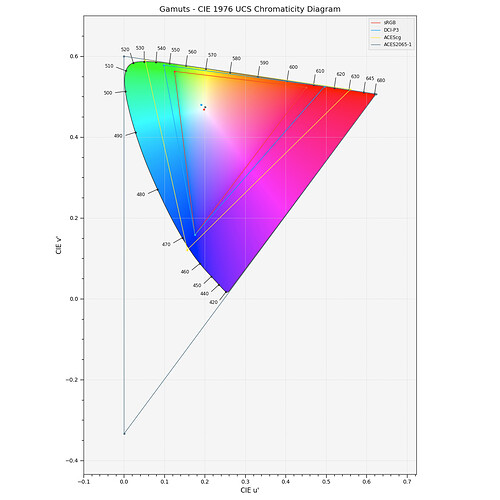 So when you are displaying an ACES2065-1 image on a sRGB display, you are only seeing the sRGB portion of the ACES2065-1 image, likewise on a DCI-P3 display you are only seeing the P3 part of the image. AFAIK, no consumer TV or Monitor is able to display BT.2020 entirely, laser projectors are almost there though. My understanding is that even though having super narrow-band primaries, the very nature of laser produces speckles that impose filtering which reduces the purity of emission. Don’t quote me on that though as I could be incorrect.