Please join us for the next meeting of this virtual working group (VWG). Future meeting dates for this month include:

Something to discuss about for the next meeting @matthias.scharfenber, @carolalynn and @nick:

So here what you see is 36*5 swatches of Filmlight E Gamut converted to ACEScg and gamut mapped through our operator at default values, and stacked against them the same swatches but with the exponent varying between 1 and 2 for each row. The whole image goes through the sRGB ODT.

The takeaway is that there are only minor practical differences between the output which leads me to the following point: If we are happy about the threshold and the limits, what will we be asking the users to test?

It would be worth looking at the image on a WGC display.

Nuke script to compare the images:

Thanks @Thomas_Mansencal. Very useful research, as ever.

However, I’m not sure that stripe is sufficiently sensitively picking up the effect of the gamut compressor. Toggling the gamut compressor on and off in Nuke on the ACEScg (from E-Gamut) strip has no perceptible effect on anything but the three most saturated blue bands, when using the Rec.709 ODT.

If you switch to the ST.2084 1000 nit ODT (I’m only viewing on an SDR display though) the effect of the gamut mapper is much more noticeable, as is the effect of changing the power between 1 and 2.

When looking at our sample images (I’ve tried Fabian’s nightclub scene, Carol’s still life and “Red Christmas”) varying the power between 1 and 2 has a very noticeable effect on all the images.

some weeks back I listened to two meetings and contacted also Carol.
I got finally some time to play around with the GamutCompress.gizmo that I downloaded from the link in the dropbox paper after the meeting #28. I know I jump ahead because I read that the testing period didn’t even start yet.

But anyway I wanted to share my first test results together with some questions.

I have a Alexa-Mini camera clip with a car headlight. I can’t share the whole image but the important part I can. We are often running into problems in car head- and tail-lights, because of the high and often clipped values in camera.

My first question is:
I am asking myself, what should the gamut compress node achieve?
Get rid of ugly artifacts only or make the image already prettier?
For me I would say make the image overall better.

As we often compare Resolve standard vs. ACES in grading at the beginning of a project, so the main comparison that I would make is 01:ACES/Rec.709 vs. 07:Alexa LogC2Rec709, This is anyway most likely what I would have seen on set.

So the comparison that I did, is to test, how close can image 01 come to image 07 or can the result get even better?

Here are my results, followed by a little text what I did and which images I compared and why. I hope this is understandable for you to read. 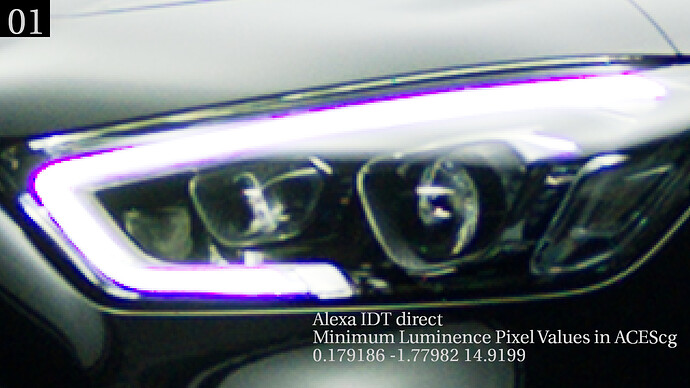 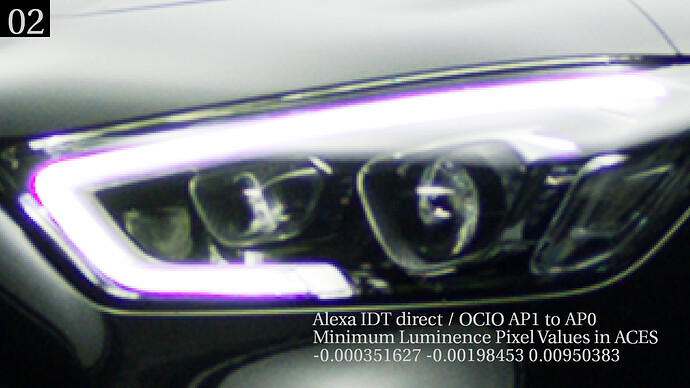 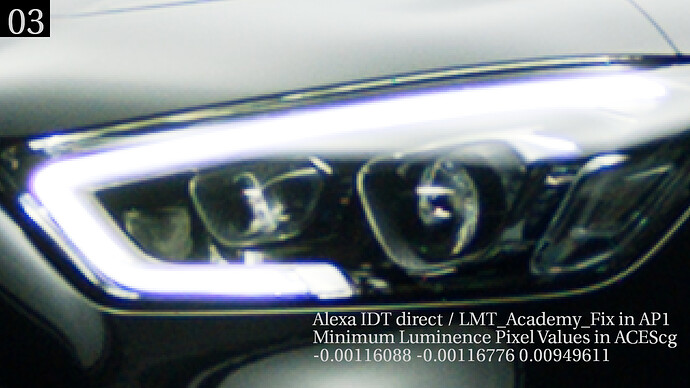 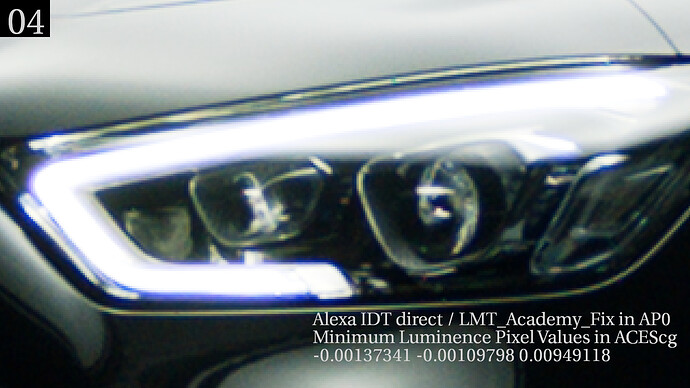 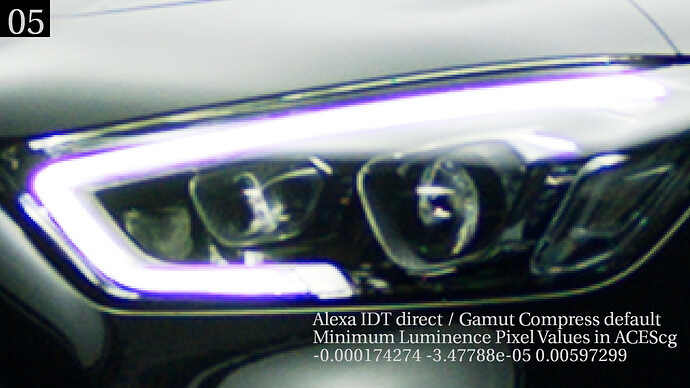 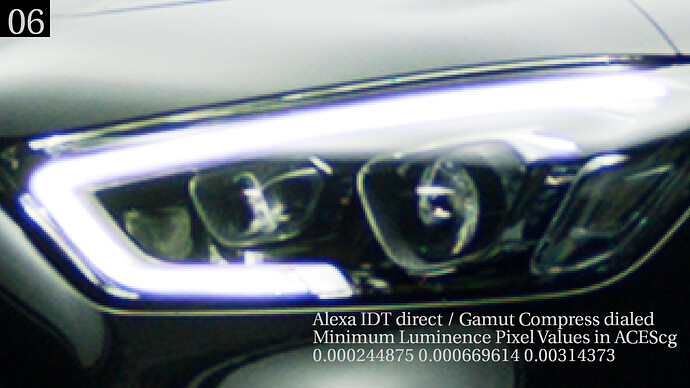 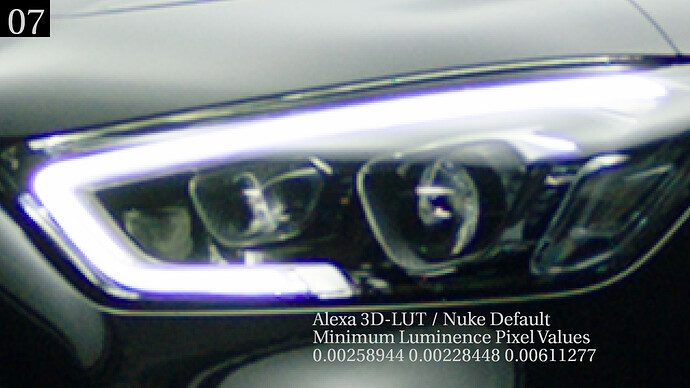 01:
Nuke ACES Alexa IDT —> Rec.709
- which shows ugly magenta pixels and a very hard edge (which is seen here even stronger by the upscaling “impulse” of the image and have the minus green values).

05:
Nuke ACES Alexa IDT
Gamut Compress with the default values
—> Rec.709
- similar to 07, but stronger because of the different tone-mapping of the RRT I guess?

03:
Nuke ACES Alexa IDT
LMT - Academy Highlight Fix (applied as a simple ColorMatrix node in AP1)
—> Rec.709
-Up to now or go-to fix, but it often alters too many other colors too, workaround is to mask the areas only instead of applying it to the whole image

02:
Nuke ACES Alexa IDT
ACEScg–ACES (just for the nuke-curve tool to check)
—> Rec.709
- I wanted to see if this changes the number results a lot or not and it doesn’t

I hope this test is useful and hopefully not really a gamut problem in the first place and only a problem of high scene linear values.

If you switch to the ST.2084 1000 nit ODT (I’m only viewing on an SDR display though) the effect of the gamut mapper is much more noticeable, as is the effect of changing the power between 1 and 2.

Yes, which raises the point of how we want people to test the operator if the effect is not really noticeable on standard monitors, it will reduce our panel size dramatically because I don’t know if a lot of people are equipped with HDR displays.

@TooDee, thanks for doing some testing…

Question: should a LMT not always be applied in AP0?

In theory, yes. But the conversion to-from ACES2065-1 can be enclosed in the LMT for convenenience or compatibility in a particular workflow. The important thing is that the same chain of operations are followed.

Just a note about the LMT-Highlight-Fix matrix: that was designed to be applied to AP0 directly. That being said, if someone likes it applied in AP1, I suppose that’s fine, as long as it’s clear that that’s where it’s applied.

How is Resolve doing this internally? working space ACEScct–ACES—LMT-Fix–ACES—ACEScct—grading?

I believe that’s the idea, yes. However, if you apply the LMT to a clip via the contextual menu in the bin or gallery page, then it applies it after the IDT but before any other conversions (i.e. on ACES2065-1 as intended). If you apply in the node graph, it is important to make sure you prepend and append appropriate color transforms from the working space to ACES2065-1 and back.

Yes, which raises the point of how we want people to test the operator if the effect is not really noticeable on standard monitors, it will reduce our panel size dramatically because I don’t know if a lot of people are equipped with HDR displays.

That’s only with the strip you need to switch to ST.2084 to see the effect. With the images a change of exponent is immediately obvious with an SDR ODT.

Right, I thought your last paragraph was alluding to the HDR ODTs when you mentioned the test images. I won’t have time to do it but it would be interesting to prepare some contact sheets.

It is indeed more visible on images where there is much more variety in term of hue and chroma compared to the stripes:

This really becomes subjective though!

I haven’t tired the gamut compressor in Resolve yet, only in Nuke, but I will soon.
But with a MBP 2018 and newer and the iMac Pro/iMac2020 you can see at least a “bit” of HDR directly in Resolve on the UI-display when you are running OS Catalina if you don’t have a real HDR screen at hand.

I found this out by accident earlier this year when I started to learn about HDR. Sadly Nuke is not supported yet as it seems.

Thanks Scott for the explanations. These were very helpful to me.

I was listening again to the last meeting.

I am very happy to hear that it is time to push out the gamut compressor to a bigger audience soon.
I am a “part” of that audience who use ACES only a part of a software like in Resolve/Flame/Nuke. Only in Nuke I can choose between ACES and another OCIO config. But for “me” as a user this is basically the same, because from a user perspective it does the same.

After some days of thinking here are some points to the meeting that I did not vocalize on the spot:

Hi All. I’ve uploaded in the Dropbox folder my reports of the test files (ramps and others) using the power value of 1 and 2 as suggested by @nick. As reported by Nick and @Thomas_Mansencal in SDR is barely noticeable but in HDR it is quite noticeable in WFM and visually (HDR reference monitor). I’ve used PQ 1000nit 2020 as OT (ACES 1.1). You’ll find screengrabs from Tektronix WFM with screengrab of the DCTL settings (all default, only changing the power between values 1 and 2).