We are experiencing some confusion going from Nuke to resolve, and comparing the resolve output with what we see in Nuke. We are experimenting with ACES for the first time, and are by no means very experienced.

Question: Am I looking at a disparity in Primaries?
Question: What is the correct workflow from Nuke to Resolve and Inside Resolve itself, to faithfully retain the comp color decisions for Rec.709, DCI P3, and Rec.2020 (our various deliverables)

Can you post sample EXRs before and after Nuke? What you describe should work

No IDT is needed for ACES2065-1. An IDT is a transform to ACES2065-1, so if the image is already in that colour space then none is needed.

The DCI ODTs are ‘D60 sim’. This is just not made clear by the ACES 1.0.3 naming convention. Name changes to make this clearer are part of the ACES 1.1 update.

Hi Nick, Thank you for your great feedback.

I have attached 2 EXRs: one is our ACEScg render, the other is the ACES265-1 exported from Nuke.

I have also attached 2 jpgs: They are frame exports of the prores coming out of Resolve.

Apologies, I hit reply before I finished typing up the reply.

rec709 D60 sim is closer to the ACEScg view in nuke, but the WP is warmer.

The Google drive link does not seem to have read permissions 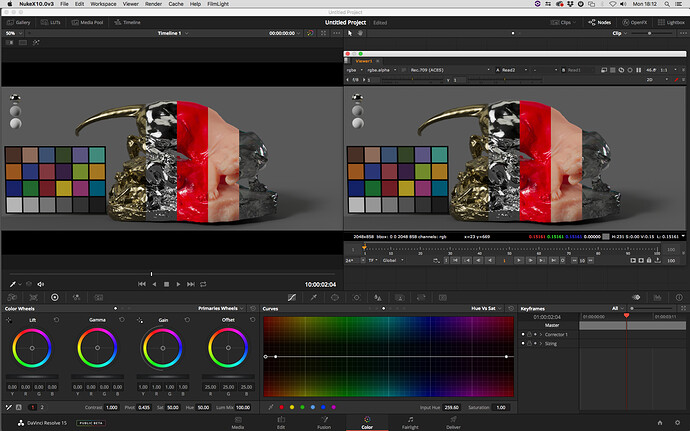 Nuke and Resolve match for me. I don’t have RV, so can’t test that, but when I bring a ProRes render from Resolve back into Nuke it matches the original EXR + the Rec.709 ODT.

Have you tried bringing the ProRes back into Nuke? Set the Read node colorspace to “Output - Rec.709” so that with “Rec.709 (ACES)” as the VLUT it’s essentially a passthrough.

How are you generating your JPEGs?

We’ve investigated the issue further and have no idea where we went wrong the first time round.
With trying it again on 2 Different machines, everything seems just fine.

Thank you for your help though. We look forward to seeing the ACES 1.1 update in OCIO.