Options for Blur in ACEScg using After Effect and/or Fusion

I have a live action plate in ACES that I am looking to apply a blur to in ACEScg.

In both Fusion and After Effect I can use OCIO to get the live action footage into ACEScg, but in going through all the blur options they all appear to be done in gamma (apologies for the overloaded term) rather than scene linear.

I found Red Giant Universe which has a blur tool that operates in scene linear. Are there any “out of the box” options in After Effects and/or Fusion?

Thanks for your time!
Andy

I think you can use Fast Box Blur which is very similar to gaussian in AE if set to 3 iterations, or use the legacy Gaussian Blur, but not sure how long they intend to keep that one around…

I think I don’t understand the problem completely. How to you “see” that they are not working linear?
The only thing that I have experienced sometimes is that the blurs produce black blotches, which I thought is because there are negative values created. But I am not sure.

The AE lens blur always worked for me.

Not sure if you can “see” it but indeed the newer Gaussian Blur causes negative values which means it’s math isn’t suitable for 32bit float data. I don’t know the details of it. Fast Box Blur is pretty fast because it’s math is a lot more simple than Camera Lens Blur. I’ve been using that ever since when I don’t need to simulate lens defocus.

Interesting. Fast Box Blur doesn’t produce negative values? At least a few years ago I noticed the negative values and tried all blurs Aftereffects offered at that time. I though all produced those negative values. But lens blur didn’t. But then I’ll give that another try next time of course.

Depending on what look you want and if you have values above 1 (which indeed changes the bur behaviour in linear), you could also go to ACEScct, do the blur and then back to ACEScg.

Nope, should be good to go. Most 32bit blur effects work fine afaik except the current Gaussian.

Depending on what look you want and if you have values above 1 (which indeed changes the bur behaviour in linear), you could also go to ACEScct, do the blur and then back to ACEScg.

Correct, totally depends on what you want. For compositing on a camera plate it does make the most sense in linear because it gives the most photometric result even if it’s within 0-1.

Giving my 2cents and more of the same the fine folks shared here.

camera lens blur looks fine to me, you should uncheck “use linear color space” 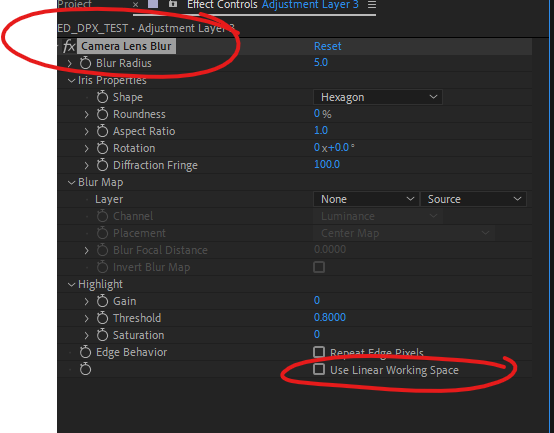