Other DRTs as real LMTs in ACES 1.3

As an exercise to learn more I wanted to see how easy it would be to make current ACES version look like some other DRT such as the popular ARRI K1S1 by creating an LMT. And I wanted to try to do it with just a tone curve and a 3x3 matrix, and not do something more and turn it into a 3D LUT (and definitely not doing the full invert thing).

And to my surprise, it worked pretty well. Not nearly perfect, but considering how simple they are, I’d say not too shabby. For normal surface colors they give decent match but less so in higher luminance levels and with super saturated colors. I did compare them against Baselight’s equivalent scene looks (3D LUTs) through TCAMv2 and they are visibly better, but the LMTs are not too far off. (I may do 3D LUT LMTs later for better match as another exercise.)

I put together a repo for the LMTs. There’s LMTs for ARRI ALF-2, ARRI K1S1, RED IPP2 and SONY S-Gamut3.Cine, plus some other stuff. All LMTs are available as CLFs (v3.0) and I also generated DCTLs for Davinci Resolve.

ACESLooks is a set of LMTs for ACES. Contribute to priikone/aces-looks development by creating an account on GitHub. 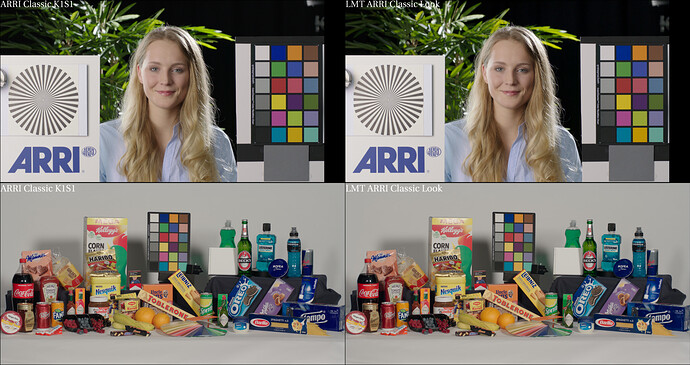 I think the per-channel DRT does half the work to help with the match, but the RRT also brought some issues. The biggest obstacle to getting a better match was the red-modifier in the RRT. It affects skin tones significantly and I found that I had to push the red more to overcome that effect (I prioritized skin tones). This then meant that other colors went off a little bit more, and made also yellows more saturated (3x3 matrix after all is very limited). I tried also without the red-modifier in the RRT and I found that it was easier to get a better match compared to what I got in the end, for whatever it’s worth.

I hope somebody finds these useful or interesting. And let me know if you spot anything amiss with the LMTs. I was thinking of doing AMF variants as well, but I have no idea how to test AMF at the moment.

A side note: I did want to do this same also for OpenDRT but that didn’t go anywhere. It became immediately clear that it’s not possible to get a match with just a tone-curve and 3x3 matrix. The LMT would have to do more and be a 3D LUT in this case, or some additional rendering transform would have to follow the simple LMT. But, I will continue playing with the OpenDRT.