"process node LUTs in" APO/AP1 what does it do?

Hello,
I had this question actually from using the LMT neon suppression. Usually, I would avoid using it on the node level and instead putting on the clip. But recently I’ve seen someone uses neon suppression on the node with the “process node LUTs in APO linear. it seems works pretty well too, also it looks like didn’t affect grading AP1, I wonder what this process node LUTs” actually means in resolve, and how to utilize the best.
Thanks!
sincerely
Mimi

When you use ACES in Resolve your timeline is set in ACEScc/cct but in an ACES pipeline it can be that the LUTs / looks you want to apply are designed for AP0 linear. It is a switch to automatically apply them as such so you don’t have set the node itself to it. 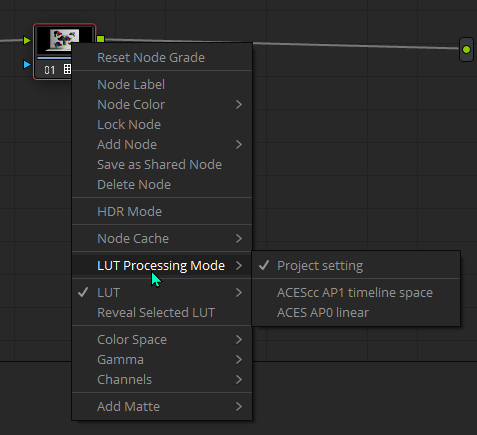 LMTs like the Neon Suppresion and the ACES 0.1.1 look are for AP0/Linear so for a correct result you either switch the project setting or specific node to it or make sure the data going in is in AP0/lin and back to timeline space after going out again but the first method is much cleaner of course.

On top of that I’d like to add that the Neon Suppresion LMT is kind of legacy now with the ACES Reference Gamut Compression added since ACES 1.3.