I don’t think I’ve sufficiently explained the problem that the shadow rolloff parameter on the gamut compress operator is trying to solve. I’ll try to elucidate that clearly here.

As we know the distance is our measure of the color purity, saturation, or distance from the achromatic axis. In our calculation of this distance we divide the inverse rgb ratios by the achromatic value in order to normalize the distance such that a distance of 1.0 is at the gamut boundary.

Because achromatic is in the denominator of this division, when achromatic approaches 0, distance approaches infinity. Because of this, it is common to get unnaturally large distance values in shadow grain.

In our example imagery, the largest distances of visible out of gamut colors aren’t that big - maybe a common maximum that is less than 2.0. See this big ramble for some examples. (I need to buff up my data analysis and plotting skills but you get the idea).

So what’s the problem? Our compression function compresses from the specified max distance to the gamut boundary. Large distances will be compressed some but they will still be kept large. For example with the current default values in our gamut compress operator, a distance of 48 in R would be compressed to 1.26732.

The more aggressive the power function the worse the situation gets. 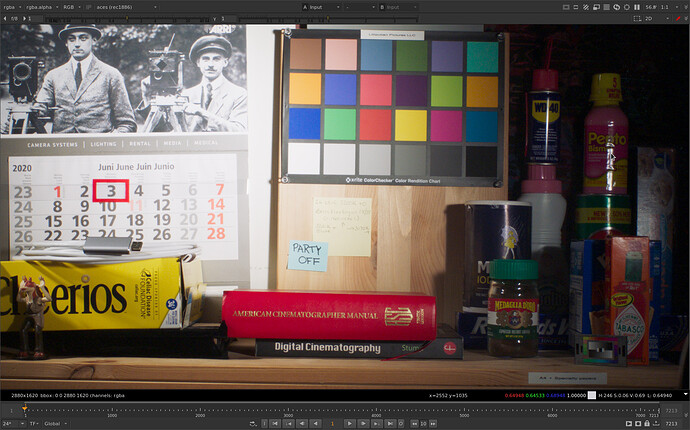 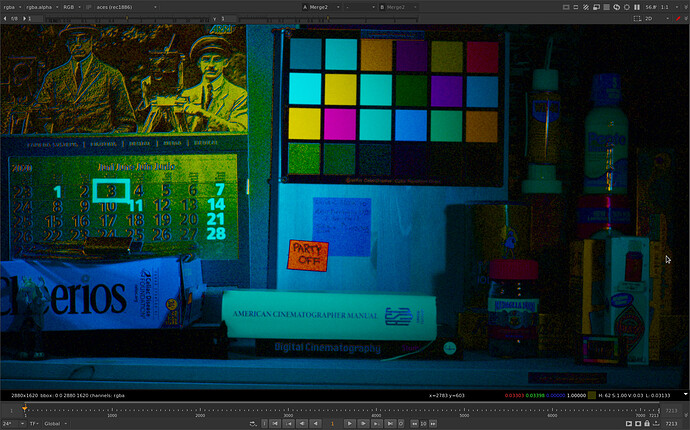 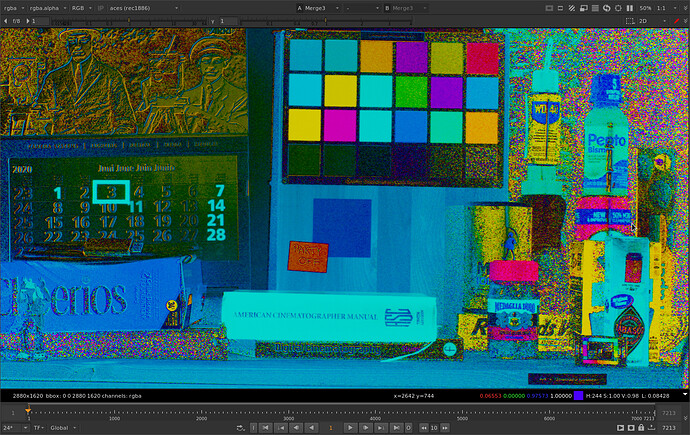 partyoff_normalized_inverse_rgb_ratios1442×910 1.25 MB
Here is the normalized inverse rgb ratios. Note how much brighter the shadow grain got. 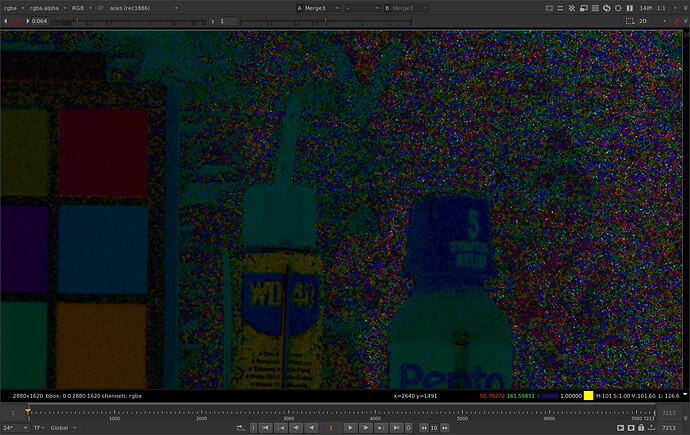 partyoff_normalized_inverse_rgb_ratios_detail1442×910 789 KB
Here’s a detail view, gaining down and zooming in on the shadow grain. I’m sampling a pixel here that has a distance in G of 161.

Now we can test inversion errors. I’m using a Nuke setup like this: 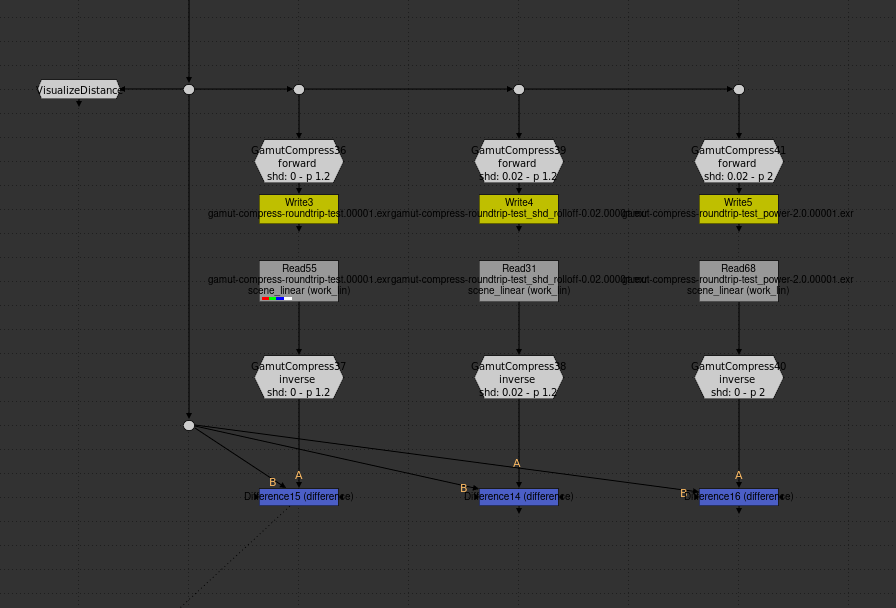 nuke_test_setup896×608 29 KB
Basically, gamut compress with a particular setting, write the result out as a 16 bit half float exr, read it back in, invert the gamut compression, and compare to the original. 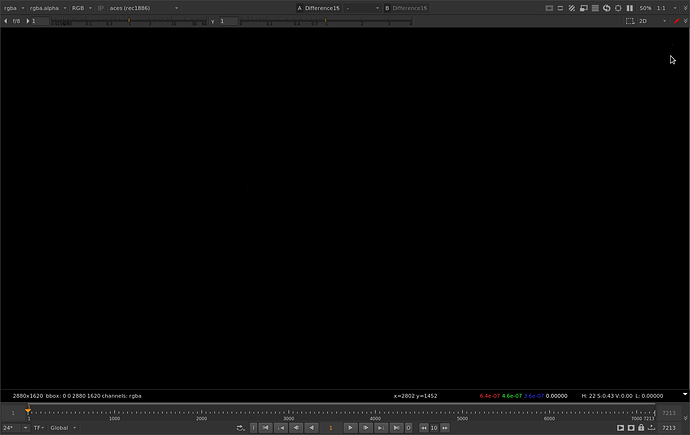 How Bad is it Actually?

Not that bad. If you’re standards aren’t too high and you are looking for obvious differences, you probably won’t see a problem. But let’s look more closely because those pixels matter!

Let’s expose up so we can see what’s going on. 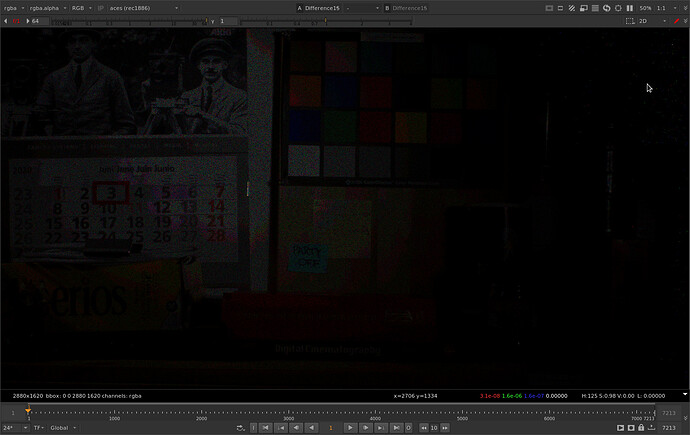 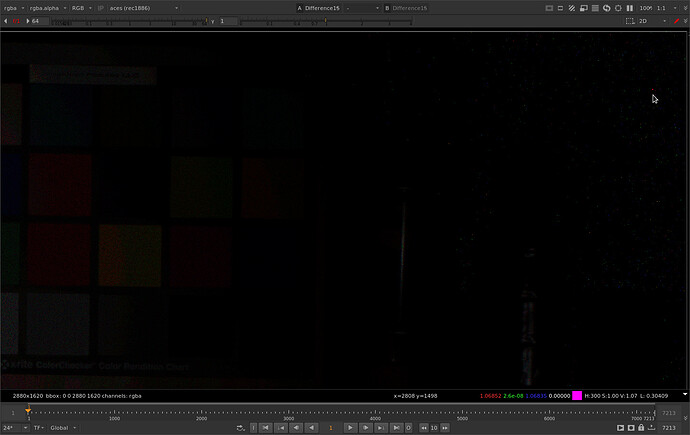 screenshot_2020-08-31_22-28-541442×910 294 KB
Zooming 1:1 we can see a bit more clearly that there are individual pixels that have pretty big differences. I’ve sampled one here that has a difference in the blue channel of 1.068. These differences are also noticeable because they are tied to the grain which is random on every frame. 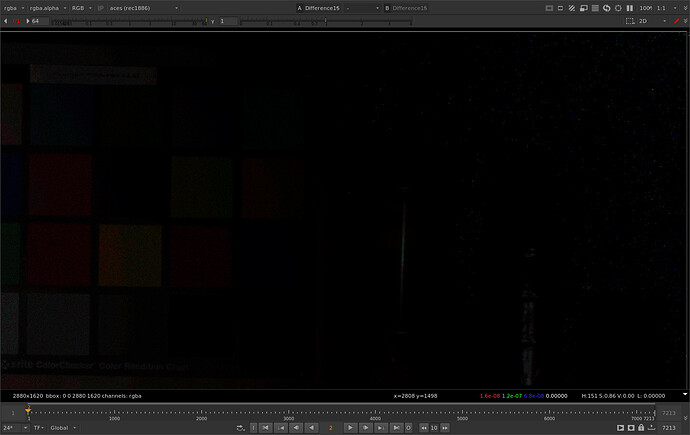 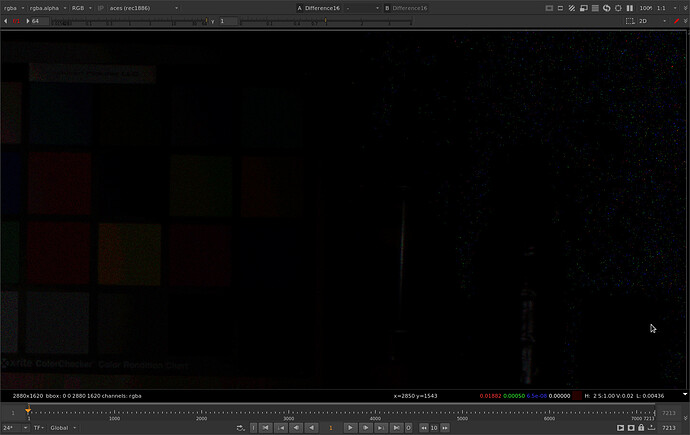 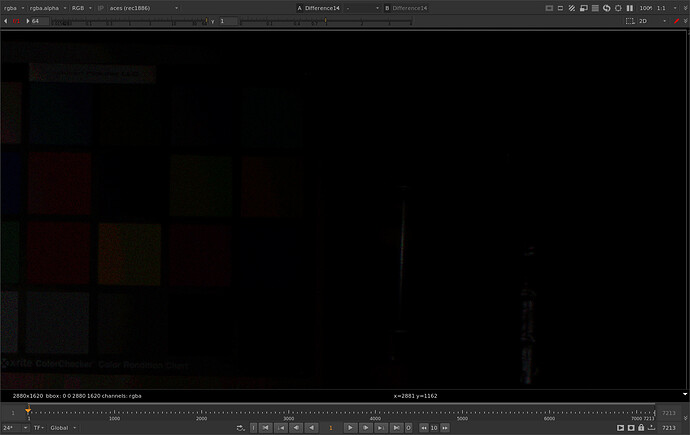 Of course there is a downside. If shadow rolloff is enabled, the algorithm is not exposure invariant. If there is a color that is out of gamut that you care about below the shadow rolloff threshold, it will be affected less or not at all.

This means that it’s important for your images to be exposed well before gamut compression is applied.

I’ve decided to change the shadow rolloff default to off in the release v0.6, because I think the differences described above may only be relevant to a smaller subset of the possible users. The problems that it creates when an image is underexposed may outweigh the problem described above.

Hopefully this post helps to explain the problem and my thinking about the solution. Perhaps it will help someone in the future troubleshooting the same invertibility issue.

I totally get what you are saying, @jedsmith. However I feel that the small subset of users who would be concerned about those issues are probably not going to be using the stock ACES gamut mapping operator that we produce, because they will want to tinker. At that point they can qualify the operator in whatever way they want in their compositing or grading system.

Thanks for the very detailed explanation, @jedsmith - it’s really helpful. Totally agree it’s not perfect and documenting our work well is hopefully how we help future users.

Agree with yours and @nick’s assessment of the majority of users influencing our default settings.

Excellent post.
There are many issues in pipelines if you have negative numbers in the shadow.
You need to know that the negative numbers are not captured by the sensor (how should it). They are produced in the internal camera processing.
The reasoning is that a flat cap black image should be on average 0.0, but it isn’t in the first place. The camera processing calculates an average value and subtracts it from each pixel (this is where the problem arises). It means half of the pixels in the noise floor are negative, and half of them are positive. From a scientific standpoint (vacuum fluctuation), this might be the right thing to do.
But there are a few catches.
I believe it only is sensible if you don’t change the scope of your measurement.
When we take the average, our scope is on a very low spatial frequency, we want that the average is zero. However, to achieve this, we apply an operation on all spatial frequencies (subtracting the same value from each pixel). So we change the scope.
Now in an image we attribute the same importance to each pixel (we trust every pixel), every pixel has the same “confidence” (again the zone of trust, sorry).
But due to the black subtraction, we cannot trust those shadow values anymore.

There are two solutions to this I believe:

Also, TCAM goes this route, and it works quite good so far. It forces the VFX pre-grade colourist to flare the image so that no negative values are in the VFX plates. Otherwise, the image would look crushed on final output.
In VFX pre-grading you try to put the deepest shadows slightly above 0.0 in display light. If the DRT strictly maps scene 0.0 to display 0.0 the colourist will flare the image correctly.

Option 2 greatly simplifies image processing. There are a few other academic catches with approach 2, like exposure tracking. But in practice this is much easier than option 1).

I guess what I am trying to say is, it is a broader discussion not necessarily isolated to gamut-compression.