Testing out the output transform candidates

I downloaded the three output transform candidates and have been comparing them here and there using old renders and in current projects. They are all quite a bit dialed down from ultra-punchy ACES 1.2! My feeling so far is that Candidate A is a nice “clean slate” and C is a “finished render” option that would require only minimal grading after rendering. I found that B was a bit saturated in some areas and didn’t feel like a general purpose, neutral choice.

Here’s the difference I noticed between B and C. It was particularly clear in this metal material. B comes out a bit orange, which isn’t present in any other output transform and I don’t think accurately represents the colors chosen when the render was set up. 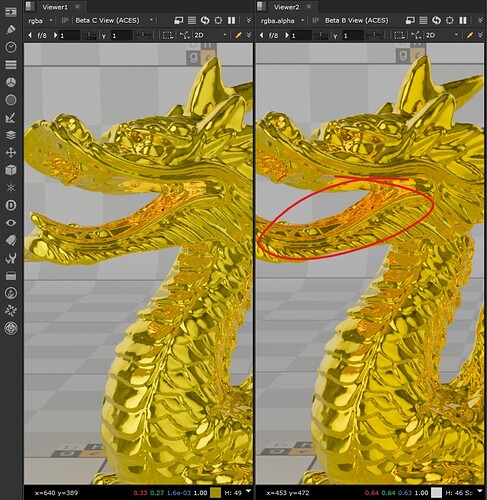 Wanted to make sure you saw this.

Participants in this working group have been collaborating for the past year to develop updated ACES Output Transforms (“RRT+ODTs”) for consideration for ACES 2.0. The group has reached a milestone by developing three potential display transforms that are each based on fundamentally different principles. At this point, feedback from potential end-users is critical in helping the group move forward with development. This test presents a major fork in the road and we need the larger community’s …