Thanks to ACES Product Partner FilmLight and their colorists who are using ACES!

Thanks to ACES Product Partner FilmLight and their many colorists who are using ACES! Some notable ACES highlights from the most recent FilmLight newsletter: https://mailchi.mp/filmlight/ypgvly0u9f-914361?e=ad5ce7886b 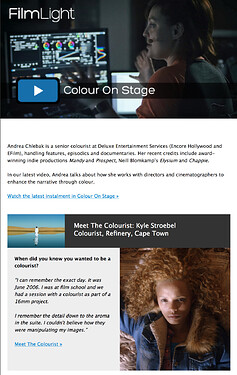 https://www.filmlight.ltd.uk/training/resources/generalvid/nab2019andrea.php
Andrea talks about ACES for several minutes starting at approx 20:51. “For me, when I set up a project, I’ll always start with ACES if I can….”

Kyle Stroebel Colourist, Refinery, Cape Town
What are your favourite tools in Baselight?:
“…I love the Texture Equaliser, and the simplicity of Base Grade within the ACES workflow.”

What tools from Baselight do you use the most and why?
“I’d say I use a 50/50 mix of Video Grade and Film Grade as my primary on most broadcast jobs; for drama or comedy I prefer to use the colour transform pipeline and work in ACES, with the Film Grade and curves being more prominent.”