Hello,
I’m a compositor using mainly Nuke in ACEScg and I wonder why a log working space like ACEScc(t) is used most often in the grading tools?

Isn’t it “better” to use the gain in linear to adjust exposure by instance?
Davinci Resolve does not even have ACEScg as working space, so, what is the reason?

The maths of traditional grading operators was designed to operate on perceptually uniform image data, limited to the 0-1 range (and maybe a littler bit outside that at either end) such as log or “video” encodings. Scene-linear image data is not perceptually uniform, and can have values way outside the 0-1 range. Traditional grading operators working on this kind of image data may not respond in an intuitive and easy to control way.

Shouldn’t offset do just that in ACEScc? Looks the same to me. Although you don’t have the luxury to see stops as a value anywhere.

Maybe this is because I’m used to work in linear with Nuke but using color corrections in ACEScc feels a bit confusing. Two examples:

Shouldn’t offset do just that in ACEScc? Looks the same to me. Although you don’t have the luxury to see stops as a value anywhere.

The offset is a pure addition on all the values. Gain is a multiplication which is equivalent to 2**stops I think. I’m not sure that using offset to adjust exposure is the way to go because it will change your blackpoint.

EDIT: I compare and indeed you’re right: gain in linear is offset in ACEScc!

EDIT: I compare and indeed you’re right: gain in linear is offset in ACEScc!

For values >0 it is. ACEScc does not code negative values because it is a pure log coding, with no “toe”.

With ACEScct (or any camera log coding) offset is equivalent to linear gain in the logarithmic part, but is noticeably different where the offset moves values into or out of the linear portion of the curve.

Here is a plot of the curve adjustment needed to match exposure changes in ACEScct. As can be seen, it is a simple offset in the upper part, but very different at the bottom: 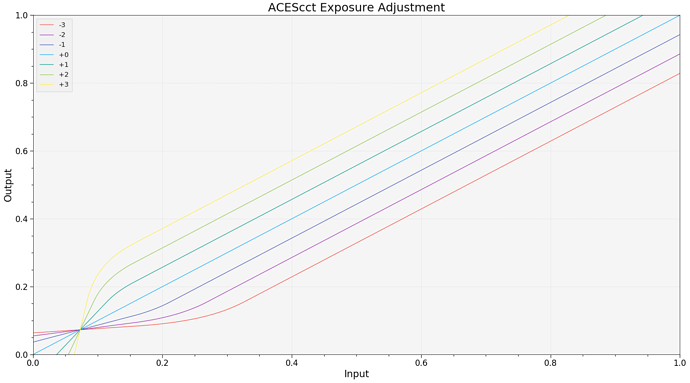 the whole subject is a bit more subtle:

It becomes tricky if you do things that incorporate several things at the same time. Scaling, for example, has both a physical component (anti-aliasing) and a perceptual component (sharpening). So there is not really a right or wrong way. Most of the time, you scale in quasi-log because the disadvantages of the sharpening components produce artefacts in linear (overshoots).

Modern colour correcter tend to develop into the direction that each operator is operating in the space appropriate for its design goals.

For the argument of addition in ACEScc vs multiplication in linear:

The result might be identical for the operation of a white balance or exposure change. But you should not forget that ACEScc will put the image into a state which overemphasises the energy in the shadows. Subsequent operations like saturation changes or scaling might not work correctly in ACEScc with lots of “dark energy” :-).
So ideally you do white balance in linear and then convert to a quasi log representation for things like sharpening or scaling.

I think generally ACEScc is quite difficult to use because it is not a physical nor a perceptual space.

Then legacy tools have lots of “assumptions” build into them.
FilmGrade (Offset/Contrast) assumes that the image is encoded in a cineon like quasi-log space. This is for what this particular tool was developed for.
Same is true for legacy keyers and other tools. The same way most of the compositing tools were designed with the assumption that the image data is presented in linear light.

Great post @daniele, there were quite a lot of discussions recently around that topic and you brought some really good examples!

Amazing post Daniele, I wish we can have your knowledge more often around here

I am glad it helps.

It really does highlight the base need to understand where and why you’re performing the specific colour processing that your are. There is too much mis-information driven by antiquated pipelines and photochemical film based advice, than warrants.

These are the details that regularly get swept under the rug and provide a true disservice to all that don’t even understand the basics. It all falls back to conventional-ism…

This is a link to a Flame workflow, but some situations might also apply to Nuke but I’d guess Nuke is more scene linear oriented .

Welcome Peter! Thanks for your first post on ACESCentral!

So much helpful information on this site, it’s a great resource.

Hello,
I have been reading this post quite a few times and I find it very interesting… Someone has recently told me :

So we have been doing some grading tests with ACEScct VS ACEScg. And I was pretty surprised by the results. 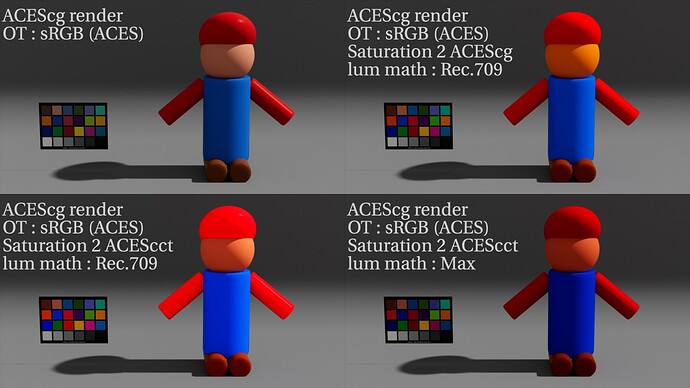 I was interested by the lum. math Max as well but it makes the image overall darker. Really not ideal.

@nick kindly explained to me that :

For the record, we found the lum. math ACEScg on Natron website and funny story, it seems that MaterialX/OSL also uses ACEScg as lum. math. Contrary to Resolve or the CDLTransform that uses Rec.709 luminance weightings for saturation.

I would love to hear your take on that @daniele

What does BaseLight do for instance ? And finally a stupid question : should I look somewhere for lum. math ACEScct ? If there is such a thing…

Now you hit a fragile point here. Saturation, or do you mean Chroma? (Just kidding).

For many image processing problems, we can decide what we take as the reference for our implementation.
For “Exposure” we can, for example, pick the radiometric domain and do stuff in linear light.
For sharpening we can decide, do we want to compensate sharpness loss in optics for example (thanks @Troy_James_Sobotka for pointing that out)) - then we pick linear light (errata for my post above). Or do we go for neuronal sharpness which comes from later inhibition for instance, then a “perceptual domain” would be probably the right starting point (as mentioned above).

Now the thing with saturation is, that it is hard to make a physical scene more saturated (or desaturated). How would you do this? How can you make a real red hat and a blue t-shirt more spectral selective at the same time - together with green grass? You could wet the surface a bit to make it scatter less, but there are limits, and then the t-shirt is wet. You could add particles in the air, but then you also change flare and contrast a lot. There is no simple way. You need to buy a new red hat and a new blue t-shirt which is more spectrally selective.

So what can we do?

You could throw in some energy preserving models:

You could try to go into a colour appearance space and take sensory adaptation and scaling of the cardinal directions as your starting point. (Good luck with scene-referred data)

musing about this from 15.00 min onwards (sorry for the voice, had an exceptionally bad hangover that morning).

You could look into modelling saturation in spectral-domain. Spoiler: produces unexpected results.

My point is:
there is no “correct” way of adding (or removing) saturation. This is the reason why we have at least 5 different ways to modify saturation in Baselight (currently working on an additional three

I also think that distance functions in both linear and log encoded RGB are not the right thing for this task. But it is something we test against when we evaluate Display Rendering Transforms.

That’s a proper answer Daniele. Thank you so much ! I’ll look at the videos.

That was a great explanation!

When we use a denoiser (OIDN), for CGI. Is it better use it in liniar and before color grading isn’t?

But denoise is not a physical phenomena, is it? Would that a exception to the rule or I’m missing something? (Provably is the last option, Could you help me to clarify that?)

Noise is a physical phenomena

So the “amount” of noise in relation to the image “exposure” is quite predictable.

Denoiser are complex algorithm and I would reach out to the denoise vendor to find out what assumptions about the colour space are build into the denoiser.

Clearly a denoiser shall be applied in the purest scene referred state without creative colour grading. But an exposure adjustment might be useful to place the image in the intended area.

When we use a denoiser (OIDN), for CGI. Is it better use it in liniar and before color grading isn’t?

OIDN is trained on scene-referred imagery, it can denoise LDR and HDR images whilst also using Albedo or Normal AOVs to improve the denoising process. This should probably be the very first step before doing anything else on the images in Comp.