Check out this news on the ACES Logo program as reported in Post Perspective:http://postperspective.com/aces-adds-new-companies-logo-program/ 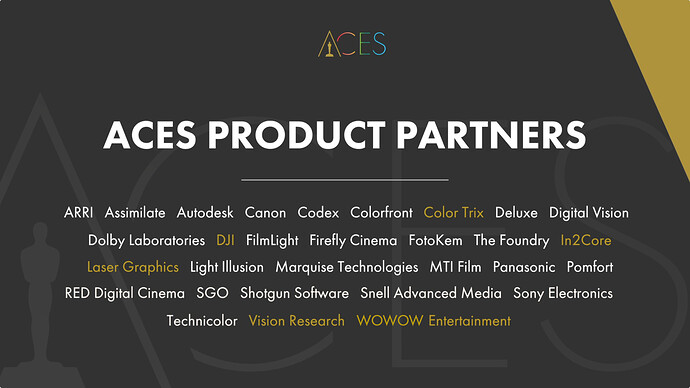 Six new companies have been added to the ACES Logo Program. Membership in the program signals that the companies are committed to implementing ACES into their hardware and software products in conformance with program specifications for consistency and quality. ACES is the global standard for color management, digital image interchange and archiving.

“ACES has given us a solid framework to efficiently solve issues, along with options, to maintain creative control for our productions. It provides much needed transparency, connecting and standardizing the workflows from on-set, dailies, VFX, DI and archival,” says Victoria Alonso, EVP, Physical Production, Marvel Studios. “Standards are important — they help studios protect and monetize our films for years, and they also help create a healthy ecosystem of suppliers and professionals who can reliably work on sophisticated productions because they know the infrastructure beneath them is solid. Standards like ACES give us a common language for applications and pipelines to connect without compromising translations and misunderstandings, and to protect the creative workflow established by filmmakers. We see ACES as an important component in allowing the industry to innovate and work at the highest levels of our craft.”