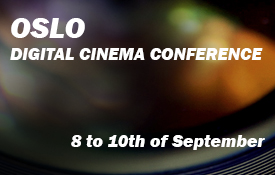 ACES to be discussed in several sessions at the 2017 IMAGO Digital Cinema Conference in Oslo, Norway on Sept 9, 2017.

ACES Staff Technical Lead Alex Forsythe will be on-site and will update attendees on the current ‘state of ACES’ including the new leadership team and upcoming ACES development efforts. He will also present a number of ways that production and post productions professionals and organizations can join the ACES efforts, as well as get support for any ACES work they’re doing.

This underscores the global nature of ACES and the Academy’s commitment to making ACES the global standard for file encoding, color management and archiving.

More info on the conference can be found here: https://www.imago.org/index.php/news/item/652-oslo-digital-cinema-conference-2017.html


I’ll be presenting about HDR in theaters and there will be an EclairColor demo, see you there!
1 Like
stobenkin (Steve Tobenkin) September 12, 2017, 6:22pm #3

To Oslo Digital Conference Attendees and all of the ACES Community:

Attached is a low res version of the Keynote that Alex presented at OSLO Digital Conference.
A full res version is archived on our Zenodo page: https://doi.org/10.5281/zenodo.888268

Enjoy! Let us know if you have any comments or questions.