A few days ago, I asked Blackmagic Design about the ACES IDT of DaVinci Resolve 15 missing RED’s latest WideGamutRGB/Log3G10 input transform
BMD replied to me, the update of ACES 1.1 did not provide this IDT, let me ask ACES
But I can already see WideGamutRGB/Log3G10 in Baselight, so who can answer my question？

At least in the more distant past, the RED IDTs were only available within REDCINE-X PRO by checking the “Use ACES” option on export. I’m not sure if they’re now providing them as part of their SDK or not. Perhaps someone closer to implementation can weigh in on the current state of things.

If not specifically provided as part of the SDK, then it’s likely that Filmlight opted to implement a conversion from the published RED WideGamutRGB/Log3G10 values. This is not all that difficult or any different than converting from any other published color space encoding/non-linear encoding.

The steps would be:

In lieu of an official IDT provided from RED, Blackmagic could do the same thing or someone could write it into a DCTL for you.

I understand, thank you.

The RED WideGamutRGB/Log3G10 IDT is included in both the ACES DCTL collection and ACES OFX Plugin.

@nick had provided me with a DCTL for R14. Don’t remember if I paid for it. Maybe he could help also.

@nick had provided me with a DCTL for R14. Don’t remember if I paid for it. Maybe he could help also.

I do have a Log3G10 RED Wide Gamut DCTL IDT available for sale on my website. But given that Paul has included it for free in his excellent ACES DCTL set, people probably have no reason to buy it now. I haven’t tested Paul’s RED IDT specifically, but given that RED provide details of the ACES matrix and log3G10 transfer function in their white paper, there is no reason to think it would be different from mine.

…given that RED provide details of the ACES matrix and log3G10 transfer function in their white paper, there is no reason to think it would be different from mine.

Having said that, although Paul’s and Jimmy’s versions match mine for positive values of Log3G10, they appear to differ for negative values (which should not commonly occur, so the differences may not normally be significant). 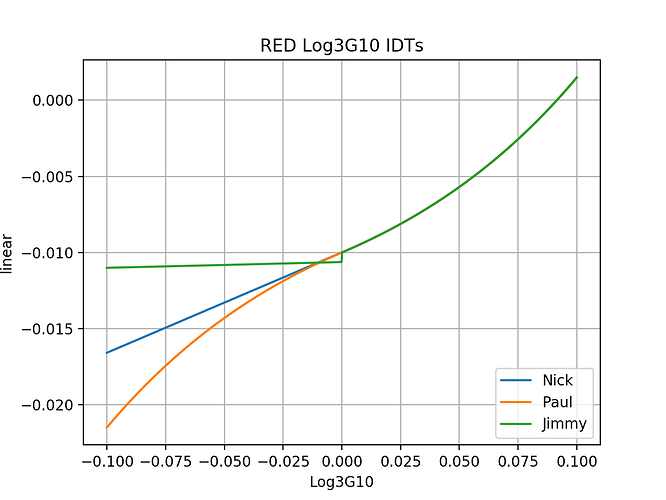 I believe Paul is using an older version of Log3G10, which mirrors about zero, instead of extending linearly. Jimmy’s appears to have an error in the calculation for values < 0.

I should emphasise that I am not posting this in order to generate sales for my version. I am happy to make mine freely available now that Paul has made his ACES DCTLs open source.

I might be mistaken but in R15 it seems like raw files are interpreted automatically and you can not select IDT manually any more. Also in R14 it made no difference what ever you chose it always got transformed as Resolve was thinking is correct.

I haven’t tested this specific behaviour in the latest Resolve 15 beta, but in the past Resolve has been a little inconsistent about what does or doesn’t have any effect when using raw media in ACES. For some raw formats the IDT selection has had no effect, but for others it has. The same goes for some raw parameters.

But anyway, it won’t always be the case that RED footage in the grade will be R3Ds. Anything which has been through VFX cannot be raw, and it is a valid approach to render VFX back to log DPX files (16-bit is recommended rather than 10) and apply an IDT in the DI system, rather than rendering to ACES EXRs.

Yes that i figure. Was just pointing the action with raw files. Even the ACES Input Transform section of clip menu is gone on some raw files like Arri, Red and DNG.

I was using the formula I got from here:

This file has been truncated. show original

It’s dated 2016. The more up to date formula can also be viewed here:

Jimmy’s DCTL is based on the correct source, but it applies both sides of the formula to values below 0 (instead of just the appropriate one).

I’ve updated the relevant entires in both the ACES DCTL set and OFX source files.

I was using the formula I got from here:

Ha! Got me, since I wrote that code for Colour Science for Python! Mea Culpa!

I thought I had included all three versions of Log3G10 which had existed during its development. But clearly I did not add in the final release version, which extends linearly below zero instead of mirroring. Must do that.

@jimmy I have been busy with work recently, just saw your reply, thank you

So I’m grading a feature in ACES shot on multiple cameras (Alexa & RED Monstro) - I’m getting tons of VFX shots in .DPX, and I’m having issues with the RED VFX shots, I’m not sure which input transform should I select for them. If I turn off ACES, looking at the RED Raw vs DPX nothing shifts they look exactly the same, so I know their color space hasn’t shifted from VFX, I’ve already graded the raw plates, so I need to just copy the grades, what do you guys recommend?

If you can get the R3Ds to match the DPX outside ACES, then you should be able to see what the decode settings are which match. What are they? Hopefully they are not settings which bake in a display referred output transform…

@Paul_Dore’s ACES DCTL set includes RED Wide Gamut and Log3G10. I also have a RWG/Log3G10 IDT as DCTL that I used to sell, but can’t in good conscience charge for now that Paul has made his free!

You could also just set the Input Transform to ACEScct and then use a ResolveFX Color Space Transform to go from REDWideGamutRGB/RED LogG10 to ACES (AP1)/ACEScct. I think that this might skip the chromatic adaptation, but would be close.

Great, thanks! I’ll let you know how it goes

FYI, to apply a DCTL IDT in Resolve, you set the ACES Input Transform to “None” and right-click the clip(s) either in the timeline thumbnail or Media Pool.