I am fascinated with FCPX the day it was released. I didn’t understand it and it was lacking many feature. But I understood that the foundation of the software is very capable. FCPX is sadly not supporting ACES, but since the beginning it works in linear RGB (I assume Rec.709) - so similar to the Nuke-Default Color management settings.

I mostly use FCPX in big commercials production as a work in progress library of all the offline edits (MP4) and later the WIP online films from Flame or Resolve (ProRes 4444). I find it very handy for comparing versions, write out stills from films for client ToDo lists and so on. And the tool is so fast with ProRes files - I am always amazed.

For a while now it supports also HDR wide gamut projects. The working space is then linear Rec.2020 - the workflow seems similar to the Resolve “DaVinci YRGB Color Managed”, but with far less options.

Although this is not ACES - I find it very interesting to learn and test HDR content directly on a MBP and then later view it also on a iPhone / iPad for example or a TV screen.

End of last year I created my own ACEScg colorbars and FCPX and HDR is a great environment to test them.

I posted some new pages on my website and would be happy to get some feedback as always.

Especially I am looking for answers how I should set the Dolby PQ metadata right for the colorspace settings and the MaxCLL and MaxFall values. 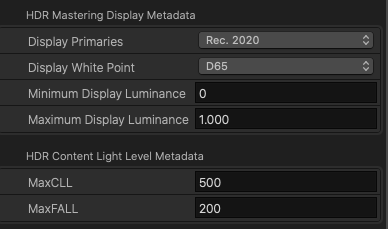 and FCPX and HDR