LMTs Part 2: How do they work and how are they made?

In Part 1, Look Modification Transforms (LMTs) were defined as ACES-to-ACES transforms that systematically change the appearance of ACES-encoded data viewed through an ACES Output Transform.

But how do they work? What “magic stuff” happens inside that box that represents the LMT in the diagram above? And, more importantly how can one construct their own LMT?

This post will begin to step through the creation of a few LMTs at increasing levels of complexity.

[Transforms used in this article are provided as CTL code at the end of the article.]

LMTs can be characterized as either “empirical” or “analytic”. Empirical LMTs are derived from sampling another color reproduction process and are typically implemented as 3D LUTs that encapsulate a subsampling of such processes (Academy TB-2014-010, Section 7.2.2). Analytic LMTs are defined mathematically and are typically expressed as a set of ordered mathematical operations to adjust ACES values (Academy TB-2014-010, Section 7.2.1).

Empirical LMTs are fairly simple to create, and can be quite powerful, but they do have limitations. ACES’ data resulting from empirical LMTs may not preserve the extended dynamic range or color gamut able to be encoded with ACES data if they are modeling an output-referred “look”.

In Part 1 of this series, an empirical LMT was described that implemented a print film emulation (PFE). That PFE is in the form of a 3D-LUT that expects 10-bit log DPX as input and supplies X’Y’Z’ code values as output. Source ACES-encoded image data must be converted to a 10-bit densitometric encoding to be usable with that particular PFE LUT, and in this case, the Academy-supplied “Universal Build Transform” is used to generate ADX10 data for this purpose.

A grid of carefully selected ACES values are converted to ADX10 and then sent through the PFE 3D-LUT, resulting in X’Y’Z’ code values. Those code values are next processed through the Inverse Output Transform for DCDM (combined Inverse ODT and Inverse RRT), yielding a set of ACES’ values that encapsulate the mapping that matches the appearance of the PFE through the forward ACES Output Transform. This relationship of input to output, illustrated with the dashed gray box in Figure 2, is derived once and subsequently saved in the form of a 3D-LUT that can drop into an ACES workflow as a PFE LMT to recreate the look of that PFE.

With that PFE LMT, any ACES values processed through it should produce ACES’ values that when viewed through an Output Transform will match the appearance of the original ACES->ADX10->PFE processing chain. 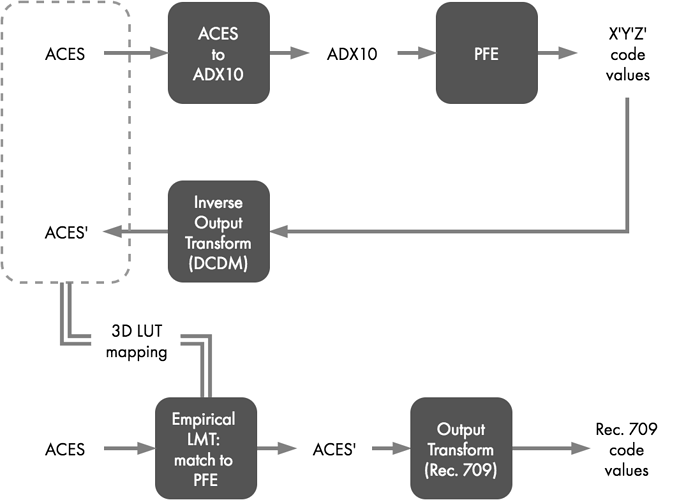 Empirical_LMT_PFE.png1064×784 23.3 KB
Figure 2. A carefully sampled grid of ACES values transformed to ADX10 are then processed through the PFE 3D-LUT to get X’Y’Z’ code values. Those code values are transformed back to ACES’ values using the Inverse Output Transform for DCDM. The mapping of the original sampled grid of ACES values to the ACES’ values is saved in the form of a 3D-LUT that can be used in an ACES rendering chain to match the appearance of the PFE within the context of the ACES System.

A similar process can be used to create an LMT to match any given “LUT X.”

Using an inverse Input Transform, a carefully sampled grid of ACES values is converted to the Camera X encoding needed for input to LUT X, which then produces corresponding Rec. 709 code values. Those code values can then be processed through the Inverse Output Transform for Rec. 709 (combined Inverse Rec. 709 ODT and Inverse RRT), yielding a set of ACES’ values that encapsulate a mapping that will match the appearance of LUT X through the forward ACES Output Transform. This relationship of input to output, again illustrated with a dashed gray box in Figure 3, is derived once and used to populate a 3D-LUT that can drop into an ACES workflow as an LMT to recreate the look of LUT X.

Any ACES values processed through the LUT X LMT should produce ACES’ values that when viewed through an Output Transform will match the appearance of the original ACES->Camera X encoding->LUT X processing chain. 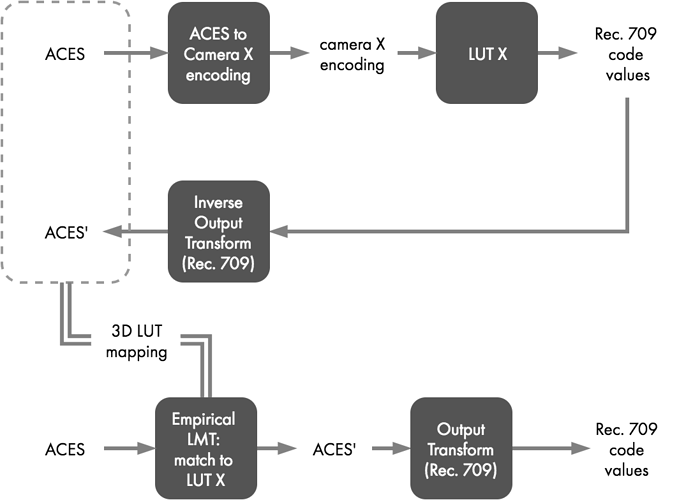 Empirical_LMT_LUTX.png1064×784 25.5 KB
Figure 3. A carefully sampled grid of ACES values transformed to Camera X encoding are then processed through LUT X to get display code values. Those code values are transformed back to ACES’ values using the Inverse Output Transform for that output encoding. The mapping of the original sampled grid of ACES values to the ACES’ values is saved in the form of a 3D-LUT that can subsequently be used in an ACES rendering chain to match the appearance of LUT X within the context of the ACES System.

Because empirical LMTs are derived from output-referred data, the range of output values from such an LMT is limited to the dynamic range and color gamut of the transform used to create the empirical LMT.

For example, consider the transform being emulated only outputs Rec. 709 at standard cinema dynamic range. If the procedure described above is used to create an empirical LMT, then any ACES input will be limited to Rec. 709 at standard cinema dynamic range at output. For the LMT to do otherwise would contradict the intention of creating an output-referred LUT.

Therefore, viewing that LMT’s output in conjunction with a P3, Rec. 2020 and/or HDR ODT (on corresponding display devices) the appearance will still match that of the Rec. 709 LUT (assuming no additional color correction is performed on the ACES’ data).

Even with additional color correction, it is also unlikely that that values outside of that limitation could be created. The ability to do so would depend both on the range of values the LMT LUT was originally made to cover (i.e. the carefully sampled grid) and how extrapolation is handled by the tool applying the LUT.

Because of these limitations, it is recommended empirical LMTs only be used when necessary to exactly match an existing look. Furthermore, empirical LMTs should certainly not be “baked in” to ACES data because that would destroy potentially useful dynamic range and color information contained in the original ACES-encoded imagery.

Fortunately, ACES’ data created with analytic LMTs can avoid this limitation because they do not use inverse Output Transforms and therefore, with careful design, will preserve dynamic range associated with the original ACES data.

Analytic LMTs will be explained in the next post.

Thanks @sdyer for the great post. Also great to know the limitations of the empirical LMTs. Would you be able to make .dctl versions of your examples by any chance?

Would you be able to make .dctl versions of your examples by any chance?

I can definitely look into providing something more “Resolve friendly”. Although practically speaking, these empirical LMTs might be better implemented just as .cube LUTs considering they’re only 1-D/3-D LUTs and have no formulaic scripting contained inside.

Or maybe a .clf if we want to test the new format at the same time.

Thanks a lot Scott for clarifying all this.
It does show however that the fact the RRT-ODTs are not perfectly reversible is a non negligible problem. You will never get a perfect match to the target LUT because of this.

@sdyer can you elaborate on the “carefully selected grid” of ACES values you mention several times?

Yes, for now, you are correct. But it’s a very, very close match. The invertibility issue is definitely something on the list to be improved upon in a new ACES version.

Yes, I can and will definitely elaborate in another post. It’s definitely a very complex topic in and of itself, which is why I glossed over it here (I wanted to keep the focus on the LMT). I’ll try to write something up to explain what I generally do to construct my grid of points.

Ok. I can import them into Lightspace and convert them to .cube. Cheers!

Sorry @CharlesBoileau, I just haven’t gotten around to it yet. Glad you found a suitable workaround for now.

Ok. I can import them into Lightspace and convert them to .cube. Cheers!

What does LightSpace do when creating a cube from concatenated CTLs which take linear ACES input with >1 values? Check that the resulting cube includes a suitable shaper and input range.

I’ve converted both to .cube (using basic Lightspace conversions). Is someone willing to tell me if they are correct? Download here

Greetings @CharlesBoileau! Do you still happen to have the .cube conversions? I tried your link to download and I got an error saying that folder was in the trash

@Scott_Warren: I’m sorry! I don’t have them anymore… And sorry for the late reply. Was busy grading.

No worries! Keep on rocking.