ACES 1.3 is a “minor” system release. This means the update does not change the Reference Rendering Transform (RRT) or modify the existing core transforms beyond addressing reported bugs and/or inconsequential formatting/whitespace changes. It also means the system will continue to be referred to ACES as “ACES version 1” in conversation and documentation.

With this release we are following a previously announced plan to ‘unbundle’ the ACES transforms from documentation and toolsets to further clarify ACES versioning. Documentation and toolset components will be released as they are available and announced separately, avoiding the need to be unnecessarily held up for a new release of ACES transforms.

Finally, this release is ready to be integrated into products. Releases of the ACES reference implementation are primarily targeted to ACES Product Partners and other manufacturers. To enjoy these new benefits, end-users should request that their preferred production and postproduction tools integrate these new features and fixes, as quickly as possible.

We would like to thank the members of the ACES community who have actively participated in the development of ACES 1.3 through ACESCentral.com and within the various Virtual Working Groups. We believe, through their participation in the development process, the result is a stronger ACES release that better addresses the needs of the motion picture, television and broader content creation communities.

Please check ACESCentral.com and the ACES Twitter and Facebook feeds for the announcement of an upcoming webinar where we’ll be discussing this release in more detail and you can ask questions about how this impacts you (in a positive way, we hope) as an ACES end-user or implementer.

With much appreciation,
ACES Leadership

Great work! From a colourist perspective; Anything that can be done to make the gamut mapping adjustable would be great in future releases.

There are many methods available, as found by the research group and the method used should be a subjective/creative choice IMHO. Sometimes I like using Tanh, sometimes another, so ACES should give that creative freedom to its users as gamut mapping can have an impact on the look desired.

The consensus of the group was that the “ACES badged” version should be fixed. This makes tracking simpler, as it needs to be applied in the same way on set, in dailies, in VFX and in DI.

If you want to use it in grading as a creative tool, there will be a parameterised version available (and obviously the DCTLs of the earlier iterations still exist). But that will not be the ACES gamut compressor. It’s just another tool in the colourist’s arsenal, just as none of the other grading operators you use are “ACES tools”.

Sometimes I like using Tanh, sometimes another, so ACES should give that creative freedom to its users as gamut mapping can have an impact on the look desired.

Closest fit to TanH given the following power-based function, i.e. that of the gamut mapping operator:

Here is my strong vote for not allowing too many variations. ACES is ment to be standard and I am so happy that finally there is a standard.

I heard that joke on that topic: Standards are great! Everyone should have one!

So I really appreciate such decisions that ACES uses only one unified method for such problems.

BTW: Does anyone know when this gets implemented in a new OCIO configuration? As enduser, that’s the only way I could use it at the moment.

BTW: Does anyone know when this gets implemented in a new OCIO configuration? As enduser, that’s the only way I could use it at the moment.

I don’t think there will be an old OCIO generated config at this point. The operator can be represented by a LUT but it is not great. We are actively working on a new generator and it is most likely where it will happen with an analytical implementation for OCIO 2. Might I ask which software are you using? There are implementations for mostly everything in the repo: GitHub - ampas/aces-vwg-gamut-mapping-2020: ACES - Virtual Working Group - Gamut Mapping - 2020

For Resolve a workaround until then could be the dctl. Thanks for that link.

But I wonder now if I have a principle misunderstanding:
Isn’t it so, that this Gammut Compression should be integrated in the RRT or ODT in Version 1.3 now?
I thought we now can forget the so called “blulight” problem.

Interesting. Do you happen to know if anything noteworthy changed in the plugin? I coudn’t find any release/dev notes.

Isn’t it so, that this Gammut Compression should be integrated in the RRT or ODT in Version 1.3 now?
I thought we now can forget the so called “blulight” problem.

If I’m not mistaken it’s still an LMT that we use should we want to because it’s not always needed in a pipeline just like the legacy blue light fix. Not entirely sure though.

I also didn’t find official information on the new features. Considering that this is such an unique and important Plugin for all Aftereffects users and de facto the only way to have a good ACES workflow there, I really wonder why this is handled like a secret. No informations anywhere. You just have to regularly check the old blog entry

Just from checking it out in Aftereffects is see:

The fact that there is CLF support and that it’s called Version 2, lets me assume that it’s the implementation of OCIO V2.

I just don’t know where we could get a configuration that uses that features. The old ACES_1.2 probably don’t uses that new features. I’ve read that old configurations are still supported. Seems to be the case. But of course then there is no advantage. But i have a feeling that we’re ready to go as soon such new OCIO V2 configuration is available.

I just don’t know where we could get a configuration that uses that features.

There is a pre-release OCIO 2.0 ACES configuration here.

There is a pre-release OCIO 2.0 ACES configuration here.

It is a technical release though, not really meant to be used by artists!

Thanks Nick! Works perfect in the Aftereffects plugin

So it’s not meant to be used in production right now? Just because it’s kind of beta or is there still something wrong or missing?

We can still work with the ACES_1.2 configuration. So if that’s recommended for a good reason I will continue to do that.

From the GitHub page :

This config is a strict and quasi-analytical implementation of aces-dev and is designed as a reference for software developers. It is not a replacement for the previous ACES configs nor the future ACES Studio Config.

It is a technical reference config for developers NOT MEANT TO BE USED IN PRODUCTION.

Ah! Thanks!
But still nice to have a little look into the future

Until the gamut compression operation is added to a point update of OCIO 2, there is no real way to apply it in applications such as After Effects which are reliant on OCIO for ACES. That is why the Gamut Compression Implementation Virtual Working Group is hoping to focus on OCIO as an early implementation as soon as possible.

Took a peep in to that dev reference config.
Really nice to see shortened naming conventions and addition of categories

Maybe too soon to ask but why are the Display transforms not in a “folder”? 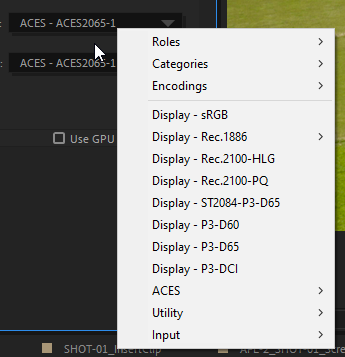 Or does it just look like this because OCIO is just in plugin form here instead of true integration into After Effects software.

Look forward to the official release!

I can’t completely see your setup on the cropped screen grab there, but it looks like you have the OpenColoIO effect set in “Convert” mode, rather than “Display”.

In “Convert” mode OCIO will perform a colorimetric conversion to the display space as that config defaults to “Un-tone-mapped”. Switching to “Display” mode will include ACES RRT+ODT in the transform, which is what you would normally want. It will also hide all the non display colour spaces in the list, and add an extra drop-down called “View” where you select options like P3 limited or D60 sim. IMHO the way that works in After Effects is quite elegant.

I see! That is indeed a lot more elegant! I never used the display option because the old config would only have ACES as display and a flat list of displays in view. The new layout makes a lot more sense

Thanks for pointing that out. Does this mean that we should use Display instead of Convert when it releases because the latter is only converting to a Display ODT without RRT?

Maybe too soon to ask but why are the Display transforms not in a “folder”?

Thanks yeah this has been noted by the Working Group a few weeks ago! I made a mental note about “fixing” that but we should probably create a specific issue on Github.