I have just uploaded to the DropBox the set of BLG files that I demonstrated during the Gamut Mapping VWG #16 (at about 45 minutes).

The idea is that these will allow people to view the output of the gamut mapper through a variety of display transforms, and therefore hopefully judge its affect on image appearance in a way which is not tied to the ACES Output Transform. We want to avoid making “corrections” to the behaviour of the gamut mapper to compensate for e.g. hue skewing which is in fact a result of the display transform.

I hope that the names of the BLG files are self-explanatory.

These can be used in Baselight for Nuke in free mode. This does require a Nuke license, as Nuke Non-Commercial does not support 3rd party plugins.

Your node tree should now look something like this: 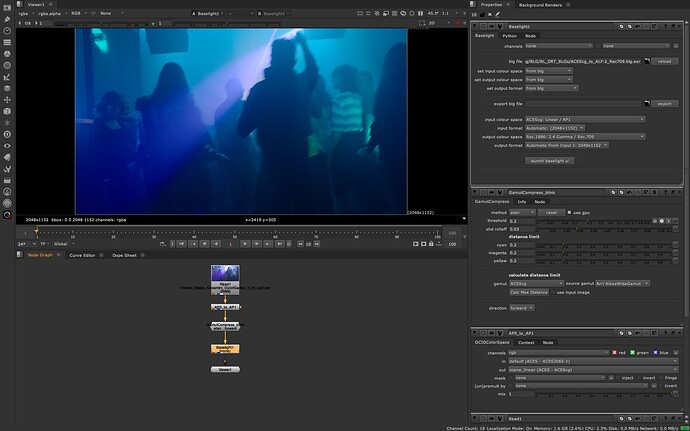 @nick: Nice! Question: Would it be worth converting those to some LUT format too so that they can be loaded easily in Resolve or Nuke for people not having the commercial edition?

That was the next step in the plan! Ideal would be an OCIO config, but just LUTs will be quicker.

And here are as set of .csp LUTs which can be used in Nuke Non-Commercial to apply the five display transforms. They are obviously not as flexible as the BLGs, as they are baked Rec.709 versions, so the output colour space cannot be changed.

Shapers in Resolve .cube files cannot have a non-uniform domain, so I’m not sure if it is possible to bake Resolve .cube versions of these LUTs with high precision which cover sufficient range for the extreme images we are examining here. Resolve free users may want to try using the Fuse version of the gamut compressor and applying the .csp LUTs using OCIOFileTransform. I have not tested this myself, as I am not particularly familiar with Fusion.

Ideal would be an OCIO config, but just LUTs will be quicker.

Yeah, certainly what I had in mind

Given what we just discussed, seems like it is almost mandatory now.

Let’s try to come-up with something that strips out unneeded things (if any) from the current ACES OCIO config and add the relevant bits for this portion of the VWG effort.

BLGs and and OCIO config now included in the super-repository.

A word of warning on the CSP lut files: it looks like the output is quite different compared to the full baselight plugin with the BLG files loaded. I think it’s because the ACEScc shaper does not lift negative values at all.

In fact the output is identical between the CSP and the BLG in nuke if you clamp negative values to zero before the baselight node.

I guess this highlights how important the shaper function is for an OCIO type implementation of this gamut compression tool. Any ideas on the best approach for a shaper that could do a better job?

It’s a good point. The BLG and CSP results appear to be identical if used downstream of the gamut mapper, as long as that is set so all (noticeable) negative values are compressed to >0. But when dialling back the effect of the gamut mapper to search for optimal settings, as soon as it allows some negative values through, the BLG and CSP results will begin to diverge.

I will experiment with a modified OCIO config implementation of the BLGs, using a transform to the native input colour space for each DRT, followed by a simple 3D LUT.